Once upon a time, a movie would be classified as a comedy. or a drama, or a war picture or western. In these days in which a science fiction film is presented as a western or music videos are sliced together to create a drama, it should come as no surprise that a movie largely billed as a comedy would also have the poignancy of a heartwarming drama. There is a history of movies that manage to accomplish both things, “It’s a Wonderful Life” is the first example that pops into my head. So many movies today are billed as romantic comedies, when there is either to much romance and not enough comedy (Letters to Juliet) or there is comedy without any romance (Bridesmaids). They sometimes try to force a little bit of one or the other into a film so it will be easier to market to the current film audience. “Crazy Stupid Love” is a romantic drama with comedy elements. You can clear see in the trailer that the emphasis is on the humorous, but the movie actually emphasizes the human. It does rely on some basic film cliches in the story telling but the dialogue, and the acting manage to overcome those weaknesses to make the film work pretty well.

Steve Carrell is cast so often in the roll of schmuck, that he has an edge as an actor from the beginning of the story, we do not need to be convinced that there is something of a loser here. 40 Year old Virgin, Little Miss Sunshine, Get Smart,  Date Night, all create an atmosphere that allows us to accept his character without much work. The question is never is he believable as a sad sack loser, it is whether or not he can be redeemed into something more worthy. His character in this movie is Cal Weaver, a nice enough guy whose wife confesses to cheating on and wants to divorce him. His pitiful circumstances would elicit sympathy for the most part except he goes overboard on the self pity and and he annoys a local Lothario, who responds by trying to make over Cal. Jacob is played by the always excellent Ryan Gosling. He appears to be a man in charge, and maybe he will be able to rescue Cal from his circumstances. Of course, this is a dramatic story, so there is actually more going on and the plot thickens.

The developments that occur as the story goes on will not surprise anyone who has seen a few movies in the last twenty years. Some plot twists are straight out of a Cary Grant movie, while others will be familiar to fans of John Hughes. There are cliches galore in the way the movie is told. For instance, we get a foreshadowing shot of a dropped photograph with Cal and his wife and the glass has shattered to suggest a division between the two of them. Movies like Babel and Crash, have used parallel storytelling that ultimately comes together at the end to reveal connections between characters and their situations. So those kinds of developments are a big part of the film here as well. Most of the convergence is designed for a laugh, but there are a couple of dramatic lines as well and they do a good job at pulling at the heartstrings.  I think we would be better off if we knew more about why Cal’s wife succumbed to an office affair, and  even more importantly, why she wants a divorce. Julianne Moore plays Emily as if she were as sad as Cal is. The only real motive I see for her claim that she wants a divorce is guilt over the betrayal of her husband.

This is an ensemble piece, with excellent work done by all of the actors in the movie. John Carrol Nash is a favorite at our house, he has a small role as a friend of the family and he gets two big scenes that provide excellent laughs, one very subtle and the other over the top. Emma Stone is in one of the parallel stories and she is quite charming and beautiful. The kid who plays the son of Cal and Emily is an actor that I was not familiar with, but he has to be solid because the heart of the movie really depends on us believing some of the feelings he has as his parents marriage is crashing and he himself is facing love.  Lisa Lapira steals every scene she is in with Emma Stone, playing her funny and opinionated best friend. Marisa Tomei is also worth a special mention because she is in a small part that develops the plot, and she is so funny in it that the term comedy can be legitimately applied to the movie. 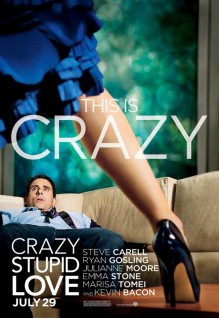 The climax of the movie occurs in the biggest cliche setting of all. As a Speech Teacher, I can tell you that the events that take place here can only happen in a movie. The town would have to be so small and the residents so patient and caring about the family, for this device to really happen. The thing that saves it from itself is the dialogue. If the words coming out of the characters were not compelling and warm and funny, the movie would be groaned off of the screen. We can forgive the ridiculous nature of the event as shown because we are listening to good actors doing lines that we want to hear, despite the fact that the way events unfold is so darn impossible. It is entertaining as all heck, and the characters are real even if the stories are not. We want them to be true because of the actors and their lines. So we will suspend our disbelief and live with the imperfections because so much of the rest of the movie is what we want; intelligent and heartfelt and interesting.