Somewhere, there sits a group of people who cannot imagine any reason to see a movie like this. They smugly dismiss romantic comedies. They believe movies should be targeted at the young. The worst offense a film like this commits in their eyes however is that it fails to be edgy. A film, from the point of view of these people should make us uncomfortable and challenge our points of view. Many of the people in this group, are motion picture producers and executives. As a result we get comic book movies, films that purport to be romantic but are actually sex fantasies that are given a romantic spin, and comedies that use every adjective imaginable as long as it starts with an F, has a compound word starting with F, or features an actor or actress known for something other than acting.

The word of mouth on this movie was not good. On the Mark and Brian radio show, I heard Mark badmouth it just from the trailer. It was a news article that Larry Crowne got a lower Rotten Tomatoes score than did the new Transformers movie. I like comic book, edgy, and raunchy as much if not more than the next person. The problem is that if you dismiss a movie for lacking those things, you will miss many pleasant experiences, that while not always important, do sustain us, much like daily conversation with co-workers does. I am probably part of the target audience for this modestly made adult comedy. I’m over 50, I like Tom Hanks and Julia Roberts, I worry about the economy and I sometimes ask myself are there second chances if I screw this up this late in my life? Two years ago, “Up in the Air”, brought us some similar themes and George Clooney in a sour love story that was biting and timely. Larry Crowne has some of the same themes, but lacks the dark undertone of the Clooney film. It lacks this for a very good reason, it means to entertain us rather than provoke deep self reflection. It is a nice way to spend a couple of hours with some old friends, and not feel like you were beat up for making the effort.

Unlike “Up in the Air”, the only nudity featured is an silly moment with Hanks in his underwear, and it had nothing to do with sex. This story about middle aged people working on their second chances, does not try to draw us in with visuals of good looking people past their prime, trying to fake being sexy. There is attraction because the characters see something in the other person that they want for themselves. They don’t cheat on their spouse, use sex as a bargaining tool, or lie as a way of manipulating others. It is romantic in nature, but it does not follow the cookie cutter model of so many contemporary romances. There are the requisite cute meets, and the secondary characters that are interesting but undeveloped. You get no explosions, physical or emotional, no snarky insight on politics, and you will not feel assaulted by being in the company of the film maker. 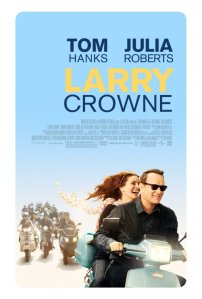 Tom Hanks directed and co-wrote this movie. The previous film that he wrote and directed was “That Thing You Do”, which is a perfect piece of charming storytelling. This movie has a lot of charm, but it’s narrative is a lot lazier than the 1996 musical. There a lot in this movie that feels real, but it is all layered in Tom Hanks persona and Julia Roberts smile. I liked George Takei as the econ professor, and Ian Gomez as Larry’s buddy with the coffee shop. Takei gets a bit more of a chance to shine, his part is fleshed out more. Larry’s friends in the scooter club are fun, but you can clearly see that he enjoys them but also knows he is not a kid just winging it like they are. Bryan Cranston plays Julia Roberts husband, who while not a complete douche, is a big enough pig that it is clear why he must ultimately be pushed out of the picture. Pam Grier is always a welcome presence, and here she is used just enough that you feel she is a friend and not just an opportunity for the character to engage in some exposition.

I heard ELO and Tom Petty on the soundtrack in several places. The musical cues work for me. Some one that wants edgy would be looking for a less obvious new talent and unfamiliar songs that make the same points. They would find the comfort in this music off-putting because of it’s obviousness. I found the right amount of Tom Petty Charm matched with Tom Hanks’ good nature, to make me smile. I teach Speech at a Community College like Roberts character, I know the students that are shown in her class. Some of you reading this are probably that guy, you know, the good natured stoner kid that has some ability but is not focused enough to get out of school what you could. The three or four teachers you see in this movie, sound a lot like the colleagues I work with. The returning students, who all actually read the material, are familiar to me as well.

We get a school based comedy, with a mild romantic plot, centered around a downsized returning student and it takes place in a speech class much of the time. You add the two appealing stars, the galaxy of welcome supporting players and the guidance of a guy like Hanks, who knows what his strengths are, and you get a movie like Larry Crowne. It is adult in the way that once meant adult, without the necessity of an R rating. It won’t be remembered as a great film, but it is a nice way to spend a couple of hours, without having to be a hipster or endure eardrum shattering explosions in completely unnecessary 3-D.