Lord of the Rings: The Return of the King Extended Edition

Before you read a bit of this post, I would request, no I Demand, that you watch the above clip. 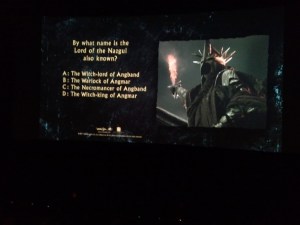 OK, Now you are properly prepared for a discussion of this the final chapter in one of the great movie series ever. The Lord of the Rings has been viewed as one of the great pieces of literature created in the last one hundred years. It took decades to figure out how to make a movie out of it and it took courage to commit the financial resources necessary to make it. The decision to go for broke and make them three movies, serves the film series very well and does carry on the structure of the books in large part. There are a few thing shifted from one book to another movie but by and large it all worked out. The inspiring speech you saw above could have been the words of encouragement that Peter Jackson used to the studio, or the producers used to their director, actors and technicians. This movie was a massive undertaking and I can easily imagine people losing heart at any given moment and needing to be inspired. Also, this speech could be a inspiration for a number of political movements and you can tailor it to your own leanings and get pumped up. 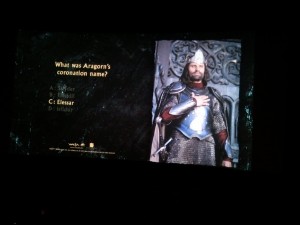 I was pumped to be seeing this on the big screen again. Two weeks ago we started on a Tuesday with Fellowship, last Tuesday it was Two Towers and then last night it was Return of the King. All those people standing in line to see Transformers don’t realize what they were missing on the other side of the door. I am a little miffed because I had stepped out , half an hour before the movie was scheduled to begin, and they played the Peter Jackson Introduction. It was a pleasure to hear him both of the other times and we got some good stories. I missed it and was steaming for the first thirty seconds of the movie because they did not fix this by replaying it at the start. Anyone who was not there a half hour early missed one of the special treats of these Fathom Events. However, by the time Deagol comes up with the ring from the bottom of the river, I forgot all of that and was transported into Middle Earth for all the dramatic climax of the series. 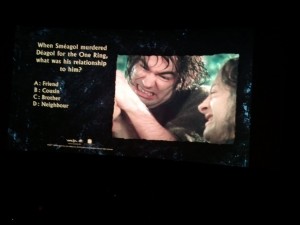 There are so many incredibly emotional scenes in the movie, it is hard to list them. Pippin’s melancholic song for Denthonr, Theoden’s decision to come to Gondor’s aid, Sam’s determined defiance of Shelob as she hovers over Frodo, are all emotional button points. I choke up as the signal fires reach from mountain peak to mountain peak, and Gondor’s plea to her traditional ally is sent. Gandalf’s reassuring description of death as the next path, makes Pippen say, “That doesn’t sound so bad”, and indeed it doesn’t; I hope whoever puts my funeral together can dig up this segment of dialogue to reassure my loved ones when I am gone. The most resonant line for me is Eowyn’s declaration to the Witch King that she is no man, as she dispatches him to the oblivion we want all of the Nazgul to go to. The extended edition adds a character that really was needed to the story, The Mouth of Sauron. The visualization of this character was creepy to a fault, and the sly lies and emotional manipulation make Aragorn’s speech even more relevant. The swish of Aragorn’s sword is one of the cheers that filled the auditorium frequently over the course of the four hour plus version of the movie.

I know the film has been criticized and parodied because of the multiple endings over the last half hour but I know all of us want it to go on. We care about the characters and we shared their travails for 12 hours of movie. It is hard to say good-bye. Fortunately, we have “The Hobbit” to look forward to in a couple of years. I don’t know who they have cast as the voice of Smaug, but whoever takes on the role will have a hard act to follow with Richard Boone’s voice work in the animated version from the seventies. This was a pretty satisfying opportunity to look back on films that made a impression on me ten years ago and did the same on the big screen again.