I will have to surrender my “mancard” for seeing this film. All you have to do is look at the poster and you know this movie was not made for any guy. This is clearly a chick flick, but one that has been danced up with sufficient raunchy humor that a man can see it with his date and not feel like a total sell out. Truth be told, my “man” status has been in doubt for years because I love musicals and thought “27 Dresses” was charming. This film meets the usual standards for a chick flick, but with some very funny twists along the way. I don’t know how it can be a complete girl film when one of the main pieces of humor is based on bathroom material that would mostly please an eight year old.

As I write this, I must say that I am probably something of a pig for the next comment, and I apologize. Maya Rudolph, who plays the bride to be in this movie,is not an attractive woman. She is interesting, but there is something about her that makes me want to get to the jokes quicker and spend less time in her company. Kristen Wiig, the star of the movie is not unattractive but she is definitely on the lesser side of the glamorous scale. While she might disagree with me on my assessment of Rudolph, I know she clearly sees herself in that “average not beautiful” mode because of the character she has written for herself. One of the things that sells this movie is that the people that populate it are for the most part, not “movie star” attractive, but average to less than average looking characters. The rest of us that fit into the same category are not going to be taken out of the film because the characters we are being asked to sympathize with are not so clearly better off that we sound like hypocrites for feeling their pain. Wiig’s character actually conveys this feeling really well when she is first introduced to the antagonist character, a beautiful women who seemingly takes over the role of maid of honor from her fellow bridesmaid. The jealous visual summary and the quivering, self loathing vocal inflection, suggest immediately that she resents this woman. While in the long run the resentment boils over and is later moderated, we are still never given any reason to feel dramatically different. She is beautiful, and will get away with so much reprehensible behavior because her good looks let her slip by. Except we in the audience get to continue hating her for her behavior and her looks. 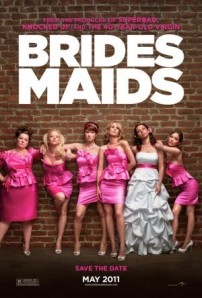 This movie will be widely viewed as a female version of “The Hangover”. That is a pretty fair assessment, except the dude movie was plot driven and the chick flick is character driven. There are however a lot of parallels. For example, there is an oddball member of the wedding party, who is there because of a family connection rather than an organic friendship. Like in the guy film, this character ultimately helps reconcile plot points and relationships that get strained. Both characters are initially unappealing, but despite their weaknesses as human beings, they have a natural sweetness that overcomes all else. There is a trip to Vegas, but that is as far as I will go without spoiling some nice moments in the film. And, of course there are romantic moments for the ensemble characters that lead to happier moments than those with the original romantic partner of the character. I laughed at a lot of the jokes in this movie, but I did not have the same kind of gut wrenching laughter that I experienced in “The Hangover”. There are differences in what can be funny for men or women, and here the differences have to do with the realities of the circumstances rather than the outrageousness of events.

An actress appears in the movie and for the longest time I kept thinking to myself, wow, she sure looks like Jill Clayburgh. I am sure I’ve seen her somewhere else. I know Clayburgh is dead so this other woman must be someone else. In the credits, there it is, “Jill Clayburgh”. This has got to be her final film, and I did not hear any press about it or remember it being mentioned in her obits back in November. Having been a child of the 70s, she was an actress that I remember fondly and she was an important icon of the woman’s movement. It’s kind of nice she went out with a film so clearly driven by female sensibilities and she had a nice part as well. As usual, a movie that succeeds like this is supported by fantastic performers who are not the leads. The loutish bootie call buddy of Wiig’s character is handsome Jon Hamm. There is a girl that goes toe to toe with Wiig’s Annie in the jewelry store she works in, and she was great. The very familiar face of Richard Riehle shows up for a brief scene, but his voice and smile sell the idea planted by that scene really well.

My daughter is getting married in a month, her sister is the maid of honor, and I can tell you that there is plenty of tension going on that is mirrored in this movie. Anyone that has been close to the wedding preparations of someone close, will appreciate the humor and situations that pop up here. Some of the humor is painful, so be warned. I have a low tolerance for humor based on throwing up, because I am a sympathetic vomitter. There is one scene in “Stand By Me”, “Monty Python’s Meaning of Life”, “The 40 Year old Virgin” and now this, that I have to close my eyes for. Most everyone else was laughing, I was gagging. You may cringe at some of the awkward moments, but you will also recognize them as being based in the truth. I expect the wedding next month will go more smoothly than in this film, but there will certainly be pain and laughter along the way.