Some franchises wear out their welcome by going to the well once too often. That is the premise of this movie, which is in it’s fourth incarnation and daring to say, “Yeah, I can do it again”. Guess what, they pretty much do and get away with it. The thing that has always separated the Scream movies from other horror films is their self awareness. The killer is inspired by horror films, and follows horror film conventions up to a point. The characters are all aware of the conventions and basically act as if they are in a horror film, with the consequences being death for those that don’t know or follow the rules. I’ve heard some mainstream horror fans complain that the movies are not scary, what I think they are really saying is, I’m not scared because the movie is doing exactly what I expect it to do and it wants me to know that. Like the previous films, Scream 4 is as much a comedy as it is a horror film. There is plenty of gore and suspense, but there is not much dread and the the surprises are usually not horror related but character based.

I saw the first Scream, by myself in the old Edwards Azuza Theaters, when they were going to seed and had not yet been taken over by the Regency Discount chain. There were maybe a dozen people in the screening and the theater was long and dark with the old style slanted floor for the seats to rise on. I was plenty creeped out by the film and jumped several times. The subsequent movies have not made me jump as much but let’s face it, once the second film in a series shows up, you know what it is you are going to get. That has been the pleasure of these movies. Laughs, and an attempt to suck you in with a series of false leads as to where the resolution is heading. I saw the outcome about two thirds of the way though the movie. I did not think they tipped it too obviously, rather as the rules they set up say, you do have certain conventions that you have to follow. 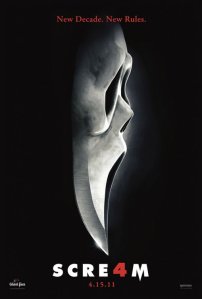 All of the cast is back, at least those that survived the previous three movies. That becomes a joke again, as the seemingly unkillable characters face another chance at exiting the series. I saw one review on line that took issue with the portrayal of the cops played by David Arquette and his deputy (who I was sure was Heather Graham for the first half of the movie). The awkwardness of the acting is a deliberate attempt to make the characters feel less real so that we would suspect them as the killer in the film. There are a number of choices like this that lead down false paths. Every time there is a chase, it is designed to throw us off the scent of one suspect and onto another. As I said, it mostly works.

The characters keep talking about how the killer is trying to top the previous entries and that making it bigger and reversing the expectations is the way horror sequels work. This one works by taking the traditional “reinvention/re-imagining” of a film, and basically tells the same story with a new cast but without discarding all the previous films to reboot the franchise. Of course that is another one of the conversations that there are in the movie as well. The two false openings of the movie, play with our expectations but are delivered in such a way that we know this is not how the movie is going to develop. The characters make fun of the very things that they have done before and are trying to do again. When Courtney Cox’s character actually uses a reference to meta-analysis, she turns right around and cracks us up by admitting that she doesn’t know what the hell that is. All of the hipsters of horror out there, smirking because they have bought into the notion of the series being an examination of horror films themselves, have to choke on their popcorn because they just got tweaked for doing what the movie wants them to do.

The movie does not try to be too clever. The horror/slasher elements are simple, the characters are easy to keep track of, and there is enough humor so if you aren’t shocked, you also are not disappointed. I jumped a couple of times, but not at the traditional scares. Those are the wand in the magician’s hand that distract you from the surprise that is coming from the other hand. It is difficult to pull these kinds of tricks off a couple of times. Wes Craven and Kevin Williamson have managed to do it again. I was worried because the last couple of horror films from Craven were disappointments, but here he gets his card punched enough that he will be able to go back and make some other films instead of fading into irrelevance. He may not always find his groove but when he does the results are like a good run from an old pro.