Sometimes you luck out and the word of mouth you hear is exactly right. I had not seen the trailer for this movie, and I knew very little about it. It’s an independent film so it was not going to be playing everywhere, but a quick search found it at the Edwards Theater in West Covina, so off we went. Basically all I knew about the movie was that it starred Paul Giamatti, he plays a lawyer and he is also a wrestling coach. This does not really sound like a set up for a great story, but it turns out that if you know much more, it might not be as appealing. I don’t want to go into depth about the story but I do have some opinions that I want to share, so I will keep it focused on theme rather than plot.

Life is hard. It is really hard for some people, and most of us who are lucky enough to be blogging at all, much less about movies, probably will never know the difficulties that two thirds of the world faces on any given day. We barely get a chance to know the hard truths that face people in this country. We have crime, and emotional betrayal and poverty and drugs. They are present in different degrees in most places in the world. We also have the problems that plague the average hard working person. Those include physical maladies, financial difficulties and self loathing of one kind or another. We do what we can each day to make it work. Some days are better than others. Most of us don’t whine about the issues but they trouble us and we often need the release that comes from sharing those burdens. This movie is about the attempt to do the right thing, and sometimes failing. That failure does not mean that we are wrong or worthless but that this attempt did not work. So what are you going to do then? 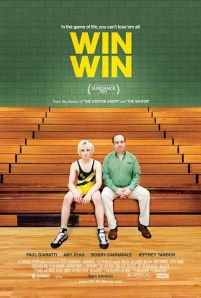 I know that I saw Paul Giamatti in films before he appeared in “Sideways” but he was never a lead character and I can’t say any of the parts he played were memorable. Since then he has been on a winning streak that any actor would love. He has starred in major films, independent cinema, television programs and cable movies and mini-series. Not to put to fine a point on it but he may very well be the least visually arresting actor on screen ever. He looks like your next door neighbor or the guy who works a couple of offices away. He is the most average looking actor that ever starred in a film. So it is abundantly clear that his appeal in entirely in his gifts. He can bring the characters he plays to life. We feel as if we know these characters because they are portrayed by someone who got the job because he could act not because his picture will look good on the poster. He is as good in this movie as he has been in anything. I think this is the kind of performance that gets by people because he turns them in so effortlessly they don’t notice. His character is trying to make it through the day, the week, the month and the year like all of us are. Some days are so tough that it is hard to function physically, other days give you a sense of pride that will leave pleasure for weeks. Everyday decisions have an impact, and the law of unintended consequences suggests that the results will be very surprising at times. The advantage is that if you are trying to do the right thing, in the long run you can recover from those things that you did that are not always as savory as you think they are.

There is a kid in the story that comes into the main character’s life. He is played by a newcomer named Alex Shaffer. This is the second performance I’ve seen in the last few months from a new actor, that really suggests that this is someone with some ability. Hailee Steinfeld from “True Grit” was a find who commanded the screen because her’s was the starring part. This guy is memorable because he is so much the character he played and his personality meshes so well with the story arc. Nothing is ever over the top, but a real personable character emerges. The part is very well written because he acts like a kid in his situation might, if given a chance to be a solid human.

I don’t know what Burt Young has been doing lately, but if you are a casting director in Hollywood, please remember him more often. This is another guy that is a natural when given a chance. In 1974 he played Curly in “Chinatown”, a big lug that helps out Jack Nicholson’s character, but we know he has also roughed up his wife who was cheating on him. In “Rocky” he is the self-pitying brother of Adrian, Rocky’s friend who is prone to violent outbursts. Here, he plays a version of the same character, a guy who has had a hard life and may not have always been a good guy. Having lived with someone with dementia, I thought he was spot on with the underlying suspicion but also the docile charm that a person in that part of life can experience.

All of the actors do a solid job showing the daily struggles that make living a chore but also a gift. There is abundant humor in the story but it really is a drama in the end. We care about the outcome, and not just of the wrestling matches. Somewhere, years ago, someone found a way to make wrestling a part of Hollywood story telling. It seems an unlikely background for a film yet it seems to work repeatedly. Here, the reason is plain, it is about the struggle to get though the challenge and the question you must constantly ask yourself. “What are you going to do about it?” This movie has some good answers, they are not always the things we would hope for, but they do tell us about our true character.