The Adjustment Bureau – #1 Trailer by hawkbcn

We actually saw this movie yesterday, right after we had gone to “Battle Los Angeles”. My daughter Allison is an English major, and she wants to do a dissertation on Phillip K. Dick when she gets into grad school. This is a story based on one of his many works and adds to the legacy of movies inspired by his writing. At some point Hollywood will run out of Stephen King and Phillip K. Dick, and then no more movies can be made. She was very enthusiastic about seeing this and I was not. This film was originally scheduled to come out back in September of last year. I saw the first trailer nearly a year ago. When a delay like this happens there is often a reason, and not a good one. While it did not turn out to be a disaster, I can see why they waited to release it,they needed to find a way to market a chase film without any excitement in it.

Allison quite liked the movie, but I was indifferent to it. As we talked after the film, I said that it seemed a little bi-polar, never sure if it believed in religion or was dismissive of the concept. Her answer is that a lot of Dick’s work is about the uncertainty of whether there is a god or whether we have tricked ourselves into believing in God. (In fact according to her, Dick saw God but did not know if it was a real experience or a drug induced experience, thus inspiring a series of stories.) So, this film would be great for college theology or philosophy students, high on grass, to spend a late night speculating over. If you are interested in story or entertainment, seek out something else.

If you watch the trailer above, you have a reasonable grasp of the story. Everything else that happens, simply repeats itself. This couple, is not supposed to get together, and each time they do they get separated again. And then it happens again, and then again, and then again and.., while you get the point. Ultimately the climax of the movie is a series of chases through doors that take you on a tour of New York City, for no particular reason except the film makers have scouted some amazing vistas and architecture for the protagonists to run through. There is very little sense to it, and the point of the story is to challenge the ideas of determinism, and free will. I have determined that I will not see this movie again of my own free will.

Access to the inner sanctum of the agents of the universe, who are trying to manipulate our lead characters, is granted by wearing a hat while going through the right door. That’s the secret password, wear a hat. One of the supporting characters, acts completely against the nature of their character, to cause events to change, for no particular reason. After it is all gone on for a long, long time, the unseen “Chairman”, makes an arbitrary decision, that they should have seen coming two hours earlier. This story was a spinning hamster ball of nonsense that might be interesting to read for a few minutes as a short story, but goes nowhere as a movie. 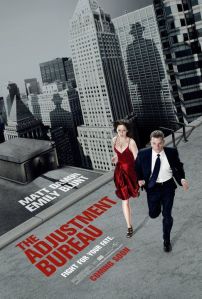 The actors in the movie are fine, in fact Allison’s main justification for enjoying the film is the love story that is going on in the movie. The leads are appealing, but every time they start to connect in an interesting or meaningful way, we go back to the metaphysical baloney that the film makers want to make the movie about. I saw “Billy Budd” on channel nine (KHJ TV), some time in the early 1970s and became a fan of Terrance Stamp. After “Superman”, I would watch for him in other films and remember when he was so young. His best film was “The Limey” from a few years ago, where he gets to play a real person. I’m glad he works, and he makes most pictures better, but in this movie he is a piece of scenery, masquerading as a person. All of the “Adjustment Bureau” bureaucrats are interchangeable, so he is wasted in the movie as an actor. His face though is used very well with his solemn mouth and deep penetrating eyes, he is the epitome of determinism. He is the best thing in the movie when he shows up, but he could just have easily been a cue card or a book page with exposition written all over it.

I know I am giving the impression that I hated the movie, but I did not. I just did not care about anything that was going on in it and I was bored. I can enjoy some bad movies for what they are, if they are entertaining along the way. This movie made me want to put on a hat and walk out the door. Whatever was on the other side would be more compelling that the two hours I spent watching this.