OK I promised I would follow up the movie a day summer project with a theme that you folks voted for. Despite the fact that it is October, the month of of Halloween, you choose teen comedies of the 80’s rather than Horror films. I think we can thank Allyson for pursuing this so relentlessly. I hope you all will enjoy these comments on the teen films. I was in my twenties and married when all these movies came out, so my perspective was always a little different. I am a big sentimentalist, I cry at commercials sometimes, so it is easy for me to get sucked up into a romantic comedy with some John Hughes drama layered on top. I am a lot busier than I thought I would be, so I don’t have as much time to write as I was hoping for, but I will try to get in an entry a week and if I can I’ll add some extras.

We are going to start with one of my wife’s three favorite films. I know we saw Valley Girl in movie theaters a half dozen times at least. In fact, we went to a double feature of Valley Girl and a Cheech and Chong movie (Still Smokin or Nice Dreams), and the stoner flick was so bad, we stayed and watched Valley Girl again to get the bad taste out of our mouth. Valley Girl is just plain sweet. There is a tenderness to the relationship between the two leads that sucks you in if you have a romantic bone in your body. This was Nicholas Cage’s first starring role and he hit it out of the park. He showed in this movie that he was an actor to watch, even if at times he was watchable simply because he was being himself. Here he is a real character and as an actor he makes us believe he is in love and suffering from the pain of uncertainty in his relationship. He is very funny in the section where he begins courting Julie and his casual charm in the Health Food store her father and mother run is really endearing. He has that shy smile and aw shucks manner that should make any girl think he was worth checking out.

Julie is played by Deborah Foreman, an actress that only make a couple of other films that I ever heard of. I can see immediately why she was so right in this role and may not have been right for other parts. She is cute pretty, with delicate features that look as if they will harden as she grows older. For a sixteen year old she was a perfect teen dream. I liked the relationship she had with her parents in the movie. She mostly disregards her friends, and with good reason, they are mostly shallow and don’t see the things in Randy that she sees. The whole opening scene with the girls at the mall was the catalyst for the movie. The song “Valley Girl” was created by Frank Zappa after listening in on his daughters phone conversations with her friends. He was fascinated with the slang they spoke and the cadence in their delivery. The movie came out a couple of years later, it had no official connection to the song and it does not appear in the movie, but it it clear that the girls in the movie are based on the sort of girl lifestyle that Zappa had lampooned with his work.

If you listen to the dialogue in the movie, you will hear many of the lines from the song being spoken in the mall scene and when the girls are together. As much as the Zappa song was an inspiration for the movie, the real basis of the film is Romeo and Juliet. This is a story of crossed lovers that pursue their passion despite the opposing forces of their families. Not their actual families but the cliques they have cast their lots with. Julie is a preppy type from the valley who’s life revolves around shopping and her friends. Randy is the brooding outcast that lives a decadent Hollywood lifestyle filled with clubs and music that Julie and her friends would think is too loud. Her friends disapprove of her relationship with Randy not because he is wrong for Julie, but because he is wrong for the in-group that they are part of. He threatens their connection to her, which threatens their vision of themselves. The connection to Shakespeare’s star crossed lovers is highlighted by a brief shot of them kissing under a movie marquee that features the film title playing in the theater.

The supporting characters add a lot of humor to the movie. Michael Bowen plays the boyfriend that Julie dumps right before she meets Randy. He is “the most bitchin dude in the Valley”, “What other dude can touch me?”. He is a stereotypical preppy smug Don Juan of the high school scene. We know he is a bad guy by the way he uses other girls to try to manipulate Julie and to boost his own ego. Beth, is the step mother of one of Julie’s friends and she has a Mrs. Robinson vibe going with one of the guys that her step daughter is into. Every time we see the movie and hear the song “Monster of Love”, we crack up. That story line has nearly nothing to do with the main plot, but it sets up some fun scenes and there is a pretty good payoff with it at the end. Finally, Fred is Randy’s best friend, he is part of that Hollywood outsider scene, but he is also a big goober who is more awkward and confident than a puppy. He throws himself into situations that are way over his head and can’t admit that he is basically clueless. I have seen the actor that played Fred in a couple of things over the years, I hope he has had a good career but it must be tough to peak with a performance like this in a movie where you will always be overshadowed by your co-star.

I taught at Cal State Northridge for three years from 1982 to 1985, so most of the people and places were very recognizable to me. During those years I was really into music, I listened to KROQ and went after my classes on Fridays to record stores to look for music I’d heard and enjoyed. There must be a dozen songs on the soundtrack of this movie that I bought the albums of the artists for before the movie existed. Sparks, Gary Myrick and the Figures, Modern English and the Plimsouls were all in my LP collection, and then the movie came and those artists were all featured. The Plimsouls especially since they are the band that plays in the nightclub that Randy hangs out in. The most overused song from a band in the early 80’s is Modern English’s “I Melt for You”, it is a wonderful song that has become something of a cliche. The cliche starts here because this was the first movie to use the song a romantic theme in a film. The end of the film has a “Graduate” vibe with a somewhat uncertain but hopeful expression on the faces of the leads, and then that song starts playing and everything is going to be OK.

This movie was championed by Siskel and Ebert on their movie review show. Both of them spoke of how much better it was then many films aimed at adults and really miles ahead of some of the dreck that targeted kids. I would have to look back but I think both of them had it on their top ten films of the year for 1983. I had always thought of 1984 as the best year for movies of the 80’s but two of my wife’s favorite films are from 1983, Valley Girl and The Right Stuff. I am really glad to have the memory of seeing those movies in theaters with her, and we still love them enormously, before the DVD of Valley Girl was released, I had to buy a copy for her for a gift, an out of print Laserdisc cost me $70 on ebay, but it brought a whole lot of pleasure to our lives. If you want a great teen comedy from the 1980’s, this is the gold standard..see it. 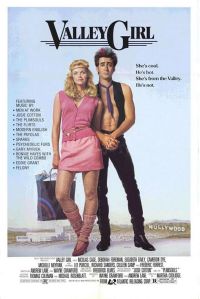