I’m finishing up the summer blog this weekend, and I have been running a little low on my films. When I started the project, I had a list of nearly 150 films that I could choose from. Originally there were just over forty in my collection. That included DVDs, Blue Ray DVDs, Laserdiscs, and video tape. Then I scanned all the Satellite Channels we subscribe to, looking for movies to add to the collection. I found about a dozen that I could use from that pool. I started haunting Wal-Mart, Target, and F.Y.E. (For Your Entertainment, formerly the Wherehouse) and made purchases that account for nearly twenty more. When I made some purchases, I was a little more flush with cash then I am right now. I recently took advantage of Blockbuster On-Line, for a free two week period and have rented a few films to use in the blog. Today however, I did not receive the DVDs from Blockbuster to finish off my project, so I am dipping into a slightly different pool to keep things consistent. Earlier in the summer I mentioned that I purchased several of the Pink Panther films to use for this series. One of the movies I bought, I discovered was really a Winter release and so fell outside the scope of my purpose. So for only the second time this summer I am going to cheat a little on the rules. 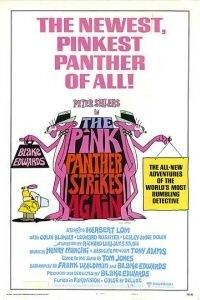 The Pink Panther Strikes Again, is the fifth movie in the series, it is the fourth to star Peter Sellars. He and Blake Edwards apparently had a falling out at one point and the part was played by Alan Arkin for one film. After the two reconciled, they revived the series in the 1970’s with a set of increasingly outlandish films. Some are better that others, all offer some entertainment but the formula became even more predictable than a James Bond Movie. There would be an opening set up, a fight with Cato, an introduction of characters that play a part in the story, and then a series of events that give Peter Sellars a chance to do his slapstick best to keep us amused.

As the series went on the one thing that always seemed to maintain it’s quality was the opening titles which featured the animated Panther and Clouseau, and the amazing theme song from Henry Mancini. The work for the title crawl in this installment was done by Richard Williams, a brilliant animator that worked outside of the system at times. In my laser collection we have a copy of the full length Williams feature, The Thief and the Cobbler, it is a weird picture that gives you a sense of how creative the Williams studio could be. For the “Pink Panther Strikes Again”, the title sequence consists of a series of short tributes to other films, and features the Panther as Dracula, Batman, Alfred Hitchcock, King Kong, and even Maria from the Sound of Music. That was probably an inside joke because Blake Edwards is married to Julie Andrews. 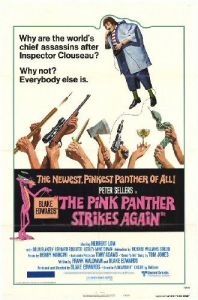 Most of what happens in the movie is explained by the trailer above. Clouseau’s old boss has gone mad, and is blackmailing the counties of the world into trying to kill Clouseau. This leads to a long sequence in the middle of the film, where a series of assassins, end up killing each other both on purpose and accidentally, as Clouseau wanders through the proceedings oblivious of the danger he is in. One of the assassins is the English actor Deep Roy, he has been in several films over the years, it is his performance that makes up all the Oompa Loompas in the Tim Burton, “Charlie and the Chocolate Factory”. He is also Mr. Scott’s assistant in the new Star Trek.

Once again, Peter Sellar’s accent is the basis of several jokes. It is just off enough that you can see why others would not understand him. Edwards is not afraid to make a bad joke, and frequently they are the funniest pieces in the movie. Two stood out for me in this entry. After an explosion in his apartment, Clouseau is asked what kind of bomb it was, his answer, “the exploding kind’. See, it’s dumb but so out of the blue that you laugh because it surprises you. Toward the end of the film, he encounters a wire hared dachshund, and asks the hotel manager as he is bending down if his dog bites. The old man replies “no”, and Clouseau proceeds to try to pet the small dog. It leaps up and nearly rips him a new one. As he confronts the old man he says, “I thought you said he doesn’t bite”. To which the hotel manager replies, “that is not my dog”. This has got to be a really old joke, but they make it work.

Herbert Lom plays Dreyfuss, and he does an over the top maniacal performance which he was clearly encouraged to do. Sometimes it seems to go a bit far, but I did like the parody of him playing the pipe organ wrapped in a black cape. You see he played the Phantom of the Opera in a 1962 horror film. This is a middling entry in the series. Most of the jokes seem flat, but when they hit there is a good laugh. If you have enjoyed any of the other 70’s panther films, you will probably like this one.Watch for the celebrity look a likes that play Henry Kissinger, and Gerald Ford. Those references, and the jokes about the President being clumsy, set the film clearly in it’s time. So I guess the best way to view it is as a relic of the Me Decade.