If you would like to appreciate the difference in Burt Reynolds as an actor and Burt Reynolds as a personality, all you need to do is compare this film to the sequel that Reynold directed himself. I have not gone back and looked at my comments on Gator, but it was an entry in the Movie A Day blog several weeks ago. I think I mentioned at the time that I was going to be looking at these out of order. I’m really glad I did, because this film is far superior to the second effort. The same character is played with swaggering machismo (Ma-cheese-mo might be the better term) in Gator. There, Reynolds is amused by everything he does and engages in a huge amount of mugging for the camera. In White Lightning, he plays it straight. The trademark self referential cackle comes out only a couple of times and it is pretty well placed. This is a fine action thriller from the early seventies that plays tightly and makes some sense of the time and place in which it is set. 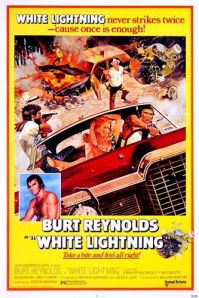 It was less then ten years before this movie was shot, that three college students were murdered in Mississippi for trying to register black voters. College protesters and malcontents were never appreciated south of the Mason-Dixon line. Today, we might wonder what the fuss was about in the Bob Segar song, “Turn the Page”. Did people really get uptight about a haircut and try to provoke fights by impugning a mans masculinity? The answer is yes, and a couple of college kids being ruthlessly murdered for challenging the local sheriff was perfectly believable in 1973. This movie opens with a basically wordless cruel killing. Two guys tied to cinder blocks are towed out on a swamp like lake in a small boat. The sheriff then blows a hole in the boat and calmly rows away with his partner. This set up is going to justify a lot of behavior later in the film by our hero. One of the kids was Gator’s “good” brother, and no corrupt local yokel is going to get away with this.

The manner in which the Federal investigation is set up with Gator as informant seems reasonable given the circumstances. This movie is not a police procedural however, and the Feds only make one more brief appearance in the film before the end. Once Gator is out of prison, he easily slips back into his bootlegging ways and fits in with the crooks he is after. Like I said, Reynolds plays it right down the line, he is not invincible, or all knowing, or always the life of a non-existent party. He does trade banter with the sheriff that killed his brother, and although there is humor, you can detect tension and malevolence on both sides during the exchange. The sheriff is played by Ned Beatty, who was in the terrific Reynolds movie Deliverance just the year before. Probably best remembered for three minutes in that movie than the dozens of other great performances he gave over the years, including two Academy Award nominations. He is very good as the self righteous lawman with a mean streak. His rants about the commies and pinko kids are not too different from those of the bootlegger Gator is using to infiltrate the organization.

Bo Hopkins plays the bootlegger that Gator is working for, he was a very relible second lead in movies. Jerry Reed takes his place in later films, and the tone suffers a bit because Reed, while good, was not as strong and Reynolds got away with letting scenes go on by indulging the singer a bit. Hopkins was in yesterdays movie as well, playing one of the deputies in Kirk Douglas Posse. He may be most familiar to any of you out there reading as the member of the Wild Bunch that got left behind in the opening scene or as the leader of the Pharaohs gang in American Graffiti, another 1973 film that I will be looking at soon for this blog site. I mentioned to Allison that Matt Clark, who plays Dude, the federal parolee that gets Gator in, was the same guy who plays the defense secretary in “The Adventures of Buckaroo Banzai”. He was a familiar face in a lot of seventies and eighties films and I thought he was particularly good here as the obviously in over his head federal stooge. Future Academy ward Nominee and Mother of Academy Award Nominee, Diane Ladd has a small part as Dude’s wife. By the way she was married to yesterdays co-star Bruce Dern at the time. (It is a small world isn’t it?)

There is much to admire about this well paced, tough little picture. As we were listening to it, both Allison and I thought we recognized music cues that had been used elsewhere. She thought it was “Inglorious Basterds” and I thought, “Kill Bill”. It turns out we were both right, Tarantino uses musical cues from White Lightning in both films. She did not like the trailer, she thought they were selling it as more of a comedy. I on the other hand think the trailer works quite well, the cheesy tag line that “White Lightning never strikes twice because once is enough” is perfect for the drive-in mentality that this picture also exceeds. Too bad they did not take that advice and skip the second film. It wasn’t bad, but it really sullies the memory of this forgotten gem. 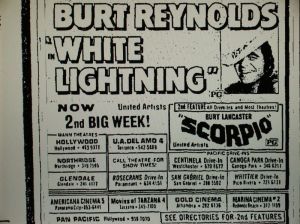 I found this ad on line, notice that today’s movie was playing at the Gold Cinema in Alhambra.