This is the shortest movie on my list for the summer. It clocks in at 75 minutes so it is even shorter than the Animated “The Rescuers”. This may also be the shortest blog of the summer since there is almost no substance to the movie to talk about. This film falls into a category of movies that you do not see any more, television parodies. Most productions that do the sorts of things that “The Groove Tube” attempted, are now done on Comedy Central or on web based programming. Saturday Night Live strip mined this material in it’s first four years, which is why it has had a hard time being funny ever since. Movies like this are a real good way to see the sensibility of the culture at the time. This movie and others like it were created for the youth culture that was dominated by pot smoking and rebellion.

I know I laughed hard at this when I first saw it. Art, Dan and I saw it at the Century Theater in San Gabriel in 1974. It was a film that had a big reputation in high schools and colleges. If there were still movie theaters that played a variety of films each week, and Rocky Horror on Saturdays at Midnight, this would be in high rotation. There are some very funny bits but there are also some slow developing duds that make it less than rewarding. We got a kick out of imitating Koko the clown on the school campus when talking about something we did not want others (adults) to hear, but the sequence is a long build up to a punchline that is over, well before the joke is. I never thought the TV parody “The Dealers” was funny. The only part of it that was amusing was the sponsorship tag at the very end.

Most of the movie appears to be made up of childish jokes about milk gone bad or crap being extruded from a chrome tube. This is the stuff that a stoner would enjoy repeatedly, but that I cannot recommend highly. It is true that the parody of 2001 was just six years after the Kubrick film came out, but the payoff is better six years later in Mel Brooks’ History of the World Part One. The TV commercial parodies only work if you had seen the original commercials and I’ll bet no one born after this movie originally came out will remember most of them. The Yellow Pages joke works the best because it has a nice visual payoff on it and it can stand by itself. The Beer and toothpaste ads just come across as stupid. 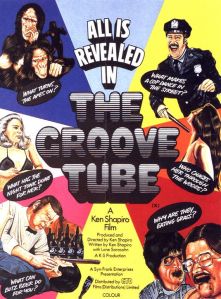 There are a whole series of sex jokes based on nudity and public observation of it. The Sex Olympics narration is fine but you would get more laughs from Mystery Theater 3000 dialogue. The most memorable visual joke involves Mr. Safety, a puppet with testicles for a face and eyes and a penis for a nose. It is shocking and funny, but it is not really repeatable. So viewing it after the passage of time is disappointing. If anyone is considering watching this, go ahead, but don’t expect a lot of entertainment. Instead of enjoying the experience it will be like looking at a freak show in the carnival. You want to look but afterwards you will ask yourself why.