Watching this today, I am reminded of how differently movies are shot and cut together then they once were. This film moves slowly through the credits, the main confrontation does not happen until two thirds of the way in, and all we are learning in the opening sections are the stories of the main characters. The movie goes down several side paths, all of them are somewhat interesting, but it is not in a rush to get to the action. This is the kind of movie you would see in a drive in, because it let you have enough story to keep you involved, but a lot of time to allow you to make out while it is developing. There is a small amount of titillation, but it is not exploitation cinema you are getting here. It is basically a hangdog story about the tough breaks that come along and can screw up almost anyone.

This was not a movie I saw in a drive-in, and even worse I did not see it with a girl. During the presidential election the year before, I worked on the campaign with a guy from another local high school. Larry VanDeventer was his name, he was a year older than I was so he had his license to drive and access to a car. We did a few things together for a couple of years, but I can’t quite say why we stopped hanging out. I know I saw this film with him at the Academy Theater in Pasadena. This was a huge theater with a dramatic carving over the screen. I seem to remember it being Egyptian but that could be wrong. It must have held 1200 seats because there was a balcony in the theater at the time. It has since been carved up into a multiplex. Larry and I saw this and we may have been two of ten patrons that evening. I went to this theater several times after as well since it was just a few miles north of where I lived. I am posting a couple of pictures that I found, I saw both Excalibur and Airplane 2 at this theater. The last thing I know I saw at this movie was An Officer and a Gentleman on our second anniversary. 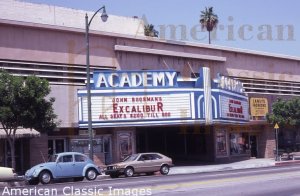 The movie did not seem slow to me in 1973, it seemed exciting and fun in the first part. The gag with the police car chained up to another car is nearly identical to the gag in American Graffiti that very same year. The suspense starts about mid-way through the film, but you are not sure what the hassle will be until much closer to the end of the film. The artwork and trailer make it sound like this is a malevolent police officer out to get innocent kids, but as you are watching the film, the cop is not really a bad person. He does have a mildly racist moment but the movie is set in Louisiana in 1954, so the way it is treated is fairly benign. There is a good relationship between him and the local townspeople and his family that makes it hard to understand what would result in his going off. Of course when everything comes to a head, it all makes a lot more sense and there is a nice twist at the end that takes a little bit of story and interjects it late into our events. There was quite a bit of suspense in the last fifteen minutes and the director plays it pretty straight. 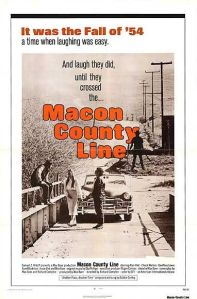 It was surprising at the time, and still to this day, that the source of the film was Max Baer. The guy who played Jethro on the Beverly Hillbillies, wrote, produced and starred in the picture as the sheriff the protagonists run into. He did a good job acting in the film and the story was told effectively if not entirely in a straight forward narrative. As I said before, it meanders around but you enjoy the two brothers that we follow from the start. The girl they pick up is cute and of course it is every adolescent boys dream to have a pretty hitchhiker end up in a romantic barn setting. I don’t recognize the three young leads from any other films, but of course there are some character actors that caught my eye. Once again in a 1970s summer movie, Geoffrey Lewis makes an appearance. He is the comic relief in this piece, working as a lazy garage attendant trying to fix the car for the kids when it breaks down. Every scene he is in is funny because of the way he delivers his lines and the mannerisms he conveys while doing so. The script helps but he is the thing that sells those moments. Once again, a character that has little to do with the main story is the most memorable thing about a seventies film. The other actor I notice was James Gammon, who was really young when he did this part but he was playing someone older. He plays one of the killers that trigger the final incident. His character is craven, and it is a small part. I just enjoy seeing people I have liked in other films in their earlier roles. Mr. Gammon died just a few months ago, and I was trying to remind my daughter who he was. She never saw or at least did not remember “Major League”, but “Silverado” is on high rotation at our house and she knew him right away as the outlaw gang leader.

One or two years latter, there was another film called “Return to Macon County”. It featured Don Johnson and Nick Nolte and was directed and written by the director of this movie. It is also a pretty good example of a inexpensive movie entertainment geared toward kids in their teens. Neither movie is something that I have held onto for years as a favorite. They were fine for the moment and then it was on to other summer activities. I suppose I would suggest the one we looked at today, since it is a little more distinctive, and it doesn’t have the shadow of two future big stars hanging over it, but either will give you a entertaining hour and a half that drips of the times they were made in.