This is the first time I have done a sequel back to back with the original for the summer film blog. Doing so both strengthens the film and weakens it. This movie sequel came out in 1978, two years after the very successful predecessor. In those days, there was not a video store to go to if you wanted to catch up or remind yourself what had happened in the first film. It is doubtful that the original had yet been on network TV and very few people had cable programming in 1978 that might have allowed them to see the first film again, immediately before the second. With easy access these days, an immediate comparison is inevitable. Let me start by pointing out a few things that make the sequel work well by viewing it so quickly.

We know immediately what the background is, and the opening scene featuring the burial of the archeologist/exorcist Pogenhagen, makes a lot more sense. We quickly establish the ominous circumstances without having to rely on a bunch of flashbacks or exposition. The quality of the production appears to be up to snuff so that should belay any worries the audience has about this project being cheap schlock made just to drain a couple of more dollars from our pockets. It is actually expensive schlock, featuring another older distinguished Academy Award winning actor, a stronger female lead and a bigger cast. Also, we immediately notice that the music is very much in the style of the first film and once again composed by the great Jerry Goldsmith. His score here is no match for the original, but that is in keeping with the rest of the movie as well. It is all polished, and professional but lacks the sinister foreboding the original provided. This may be because the story makes some big character jumps and focuses on the grotesque deaths rather than the suspense or horror elements leading up to those deaths. The drawbacks of the movie are more obvious watching it a day after the original. We didn’t always know what was coming in the first film because we are discovering the true nature of the evil faced by the protagonists as they are becoming aware of it. Here we already know what’s going on and we are waiting for what is going to happen, not why is it happening or what does it all mean. 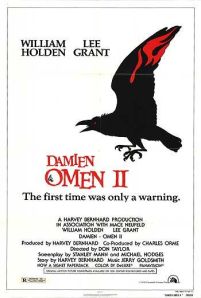 In the original story, there is one apostle of Satan in the wings, waiting to protect little Damien. She is frightening in attitude and appearance from the first time we encounter her. In Damien: Omen II, he is surrounded by evil supporters, anxious to protect him and set up his future empire. They usually have the sinister look of an accountant. The only one that might spark a little anxiety in the audience is a military school officer, played by Lance Henrickson, that is just not given enough to do. All of the people that might stand in the way of Damien or hurt him in some way are knocked down like bowling pins, without much character or suspense. Crows substitute for hellhounds in this movie. A raven, even one pecking at the face of a hapless victim, is just not as intimidating or frightening as a slobbering Rottweiler. Basically all this movie has going for it are the death scenarios, some of them are very clever but not startling or surprising. The death of the photographer in “The Omen” was sudden and there had been some set up of the threat earlier in the movie. Here we just see invisible mechanisms start the process of the next victims doom and we hope for a money shot. We are rewarded with three strong death images, two sudden and visually shocking. The third one is haunting in showing a man drown under the ice of a frozen river as men and boys try to follow his trek through the currents and fail to reach him despite the fact that he is merely inches away under the ice. Most movie horror fans of today will find the shocks here mild compared to the visceral dismemberment in movies like “Saw” that are so prevalent today. In 1978, the segments in Damien were state of the art. They got the effect without the drama to go with it.

For many years the standard business model for Hollywood when it came to sequels was simple. The follow up films did half the business of the original, so be careful in investing too much time and money. Each subsequent follow up was expected to drop off another third to fifty percent. There were occasional exceptions but the Omen series followed the pattern. This movie was a success but not the kind of success that you could milk for good. I would have to look at it again, but my recall of Omen III is that there was a big drop off in quality and production value. I don’t think it had the same producers and I know it did not have the same financial success. I saw Omen II, with Dolores and Jon Cassanelli on it’s opening day, at a theater on Hollywood Blvd., I think it was the Vogue. I saw Omen III by myself, as part of a double feature at the Alhambra Theater, well after it had opened.

The makers of this movie hit many of the right notes for a film of this type but there are a lot of clunkers along the way. Too often, someone that has key information that could alert Uncle Richard to the danger, is written poorly and then played shrilly by the performer. Aunt Marion comes across as senile with her manipulative attempt to drive a wedge between the two boys and their family. The journalist that is supposed to be the sister of David Warner from the first movie, seems like a lunatic from the first moment she shows up. The museum curator, who is friends with the family is not speaking like a reasoned professional to his boss and friend, but like a scared little rabbit. Damien accepts much too quickly the mantle of Anti-Christ and never confides in his closest friend, his cousin, until it is time for the cousin to be out of the picture. I don’t think this is a bad movie, it is an OK shocker, but that is all. I read that William Holden turned down the part in the original making way for Gregory Peck, but after the success of the first picture was glad to come on board for the sequel. That’s actually the second time he takes the wrong train in these movies.