Here is a movie that had one thing going for it in the theaters that could apparently not be reproduced for home viewing, Sensurround! This was a sound system that used an ultra low frequency bass set of speakers to actually vibrate the theater during key scenes in the film. Imagine going beyond 3-D, or Smell-o-rama, this is almost certainly part of the concept that was being parodied in the film Kentucky Fried Movie, our first Movie-A-Day. Sensurround was actually created for the movie “Earthquake” a few years earlier. The process was only used in three theatrical films, Earthquake,Midway and Rollercoaster. This movie was it’s final bow. The process did receive a technical Academy Award, but I guess competing sound systems ultimately made the process less economically viable. I actually saw the three films made with Sensurround in theaters. I thought it only made sense in Earthquake.

Other than the special effect, this was a very typical Universal release in the summer of 1977. I am not exactly sure what it was about Universal Films in those days, but they often looked like they were lit for television rather than the movies. The film stock seems a little flat. The colors are fine but there is no richness or texture to the images. I was always able to pick these movies out because of this look. Also, there was a very stock set of players in the movie. They were all pros but they seemed to be thrown in as background in studio’s movies, much like a set that you would see repeatedly used. Harry Guardino, Richard Widmark, William Prince were in dozens of Universal movies and played similar parts in other studio efforts as well. Before “On Golden Pond” Henry Fonda spent the last fifteen years of his career, popping up in bit parts on Universal titles. This allowed them to bill a movie star, but one that was not the lead, that they did not have to pay much and was usually in the film for only a couple of scenes.

Rollercoaster is an attempt to combine a suspense thriller with a disaster picture. The opening actually works pretty well up until the actual catastrophe. The effect of the first disaster is created on stage with live action, life sized dolls, and some speed-ed up film sequences. They are satisfactory, but they look really creaky by comparison to things that were being done a couple of years later. Star Wars actually uses some similar techniques but worked so much better. The work was professional but it looked better suited to a less expensive TV production. Before the coaster accident, there is a long suspense segment with the villain eying his target, getting into place, victims and near victims changing places. The climax is a letdown. After that it becomes a fairly standard cat and mouse game between the cops and George Segal’s safety inspector on one side, and a very clever criminal on the other.

The use of Magic Mountain for the final confrontation works well, the park had not been overexposed at that point, the Revolution Roller Coaster is very photogenic, and there is some good background imagery. The roller coaster sequences are shot very effectively, the nighttime accident at the beginning does not afford the same visual impact as the wide screen day lit ride at the end. They probably copied the idea from “This is Cinerama” but it looks exciting from your seat even if you are not in a car on the coaster tracks.

There are a few interesting casting points in the background that I had forgotten about. Charlie Tuna, who is a well know DJ from the 70s up through today, has a part playing himself at the opening of the Revolution. Gary Franklin, was a radio reporter who played a radio reporter. If you don’t remember, a couple of years after this came out, he was the movie critic on L.A. CBS affiliate, where he quickly became widely know for his One to Ten point scale. When he move to KABC Tv a few years after that, he had a ten year run as one of the most powerful film critics in the country. Siskel and Ebert eventually became the gold standard, but Franklin was always distinctive and very opinionated. Helen Hunt has a part as Segal’s daughter, in a red herring appearance at the park during the climax. I think I also spotted Craig Wasson and Steve Guttenberg in the cast. 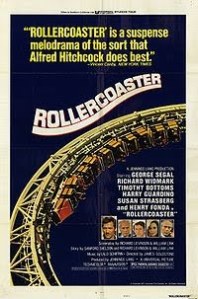 The band Sparks, appears in a concert sequence during the Magic Mountain scenes. I did not remember they were in this at all, and it is sort of funny because in 1983, Dolores and I along with Kathy and Art, went to a special event night at Magic Mountain, and Sparks was the featured act. I actually saw the movie at the Garfield Theater, down on the corner of Garfield and Valley. The speaker set up took out a large number of seats, but that was a huge movie house that probably seated 600 to 800 people. Quite a change from the elegant but small (200 seats) theaters of today. It’s is an old fashioned movie, that felt old fashioned when I saw it in 1977.