Was there ever a woman so longed for as Jennifer O’Neil in “the Summer of 42”? She was the epitome of beauty, grace and idealized love. Not just for the main character in the movie, but for all the men in the audience watching. She is seen early on in the film from afar, and in the last twenty minutes barely speaks a word, but her character is imprinted on every scene in the movie, including those that are comic and that she is not a part of. Our hero “Hermie” can’t get her out of his head and neither can we. The casting agent that put her in this film should have received an award. This was a very effective performance, but it was a match between image and actress that makes the the movie work.

Gary Grimes, the actor that plays Hermie had some other parts in early 70’s movies, but his performance here is really delicate and spot on, and he was really just a kid. Jerry Houser, who plays Hermie’s best friend Oscy, has had a successful voice over career and still works. Neither will probably ever match the nuanced and comical work they did in this movie. The film came out in 1971 and I remember it well because it was a big hit and was playing in the theater in Crestline, Ca., the summer that my family performed for three months in a tent at Lake Gregory. I had always thought the movie was based on a book, but it is one of those rare cases where the book was based on the screenplay, became a bestseller before the movie came out, and made the author a bundle in two distinct ways. It is a memoir, so much of the story is supposedly based on the life of the author.

When I was in high school, I did an speech interpretation, using a section of the book , for my training at the Western Forensic Institute. I don’t think I ever used it in competition myself, but I know I lent my interp to Bill Gross and Leo Mohr, for them to use as a duo interpretation when we were in college. My debate partner Rick and I, did Twinkle, Twinkle Killer Kane and they did the Summer of 42. Everybody seemed to get a kick out of the four of us “serious” debaters doing oral interpretation. If there is a list of the funniest pieces of business in the cultural atmosphere in the early 70’s, right next to Monty Python’s Knight’s of Nee, would be the episode from the film where Hermie goes to the pharmacy to buy condoms. Watching it tonight, I was worried that it would not come across very well, times have changed so much. Amanda was cracking up however, so the point still seems to be funny, even if schools are passing out condoms at lunch these days. 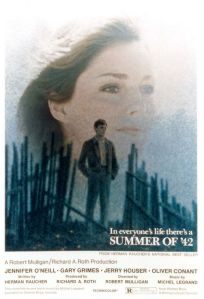 The movie is set of course in 1942 and the main characters are the same age as my parents would have been in that same year. I sometimes feel that I can see my folks when they were growing up because of this movie and a film set in the same time period called “Racing with the Moon”. The clothes and music and cars and wartime background, are visualized very realistically, and the kids act like kids might have in that time period, not precocious transplants from contemporary times. Every outfit Jennifer O’Neil wears in this movie is sexy, without being flashy. People wore clothes everyday, that were fashionable but also elegant. Kids did dress down, but when they dressed up you knew it.

The music from this movie may be the most romantic tune ever created for a movie. I will include a link for you below, but it has images from the movie that you might want to wait to look at until after you have seen the movie yourself. Oh yeah, you should see the movie, It is a sweet meditation on the key moments in our lives. Those moments are not the same for everyone, but there is a point when you can say, after this I was different. The experience shared in this movie is a romantic one, but for anyone of us it could be unique; your first car, losing a job, changing schools, finding a new best friend. The movie is very tender and discrete in handling the coming of age story. The mood that permeated our family room afterward was somber. Amanda asked me if I had seen Jules and Jim because she felt very much the same at the end of that movie. I had not looked at this movie in twenty-five years or more, but I remembered it almost word for word. I guess it made quite an impression on me. I think everyone else will be impressed as well.