This time I want to start with a story about the movie going experience instead of the movie itself. This is one of the few things in my life that I am ashamed of, rather than just embarrassed. I went to see this movie twice on opening day. The first time was with Dan and Art, and we went in the afternoon and had a great time. Here is the part I don’t like to admit, we then picked up Dolores and Kathy, and took them out for the evening, and we did not tell them we had already seen the movie. I’m not sure why we did this, except that we suspected they would not be interested in going if we had already gone, and we wanted to experience their reaction to the movie. It was a lousy thing to do, to keep this from them. On the way out of the movie, one of us finally announced that we had gone that afternoon, and all hell broke loose. It was some kind of violation that in retrospect seems obvious, but at the time probably appeared to be inoffensive. I’m not sure if Kathy ever recovered from this, and we had weird episodes at the movies with her on many subsequent occasions.

I know I apologized to Dee, and I have never done anything like this since. I have done plenty of other stupid things related to movie going, including seeing a movie or two that she wanted to go to without her. That was usually a result of my not realizing her goal in the situation, it has never been a deliberate deception. By the way, Dolores, once again I am sorry.

Now to the movie itself. I have read other comments suggesting that the Rocky sequels are all unnecessary. I would have been perfectly fine if they had not happened because I agree, there was nothing to fix in the original. The first Rocky is perfection. It was the little movie that could and did win us over. There were no big stars or expectations, just the strength of the story and the passion of the writer/creator of the character. Over the years, Stallone probably got a bad rap for many of the choices he made. Some of the acting roles he took just did not work, and some of the films he directed, although successful, were not very good. That having been said, Rocky 2 represents the qualities of the underdog he was and it is true to the character he created. After the success of the original Rocky, Stallone made a couple of duds and it looked like his career might flame out. He had enough cache left however to leverage himself the directors role on this movie as well as star and writer.I think he acquitted himself very well. 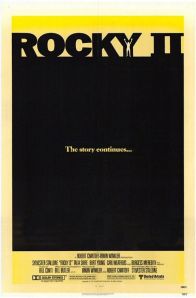 My memory of the original LA Times review was that they thought it did not seem true to his character, some of the things he does in the movie. I think that is exactly the point. Rocky needs to figure out who he is. That he created a name for himself in the first fight with Apollo Creed, doesn’t mean he knows how to handle his life and new notoriety. In a contemporary version of this story there would have to be a couple of violent confrontations and cruel teasing to get him back in the ring. There is a bit of psychological manipulation, but most of the motivation to fight comes from the fact that this is how he finally defined himself. He does not get back into the ring with Creed because he has been called chicken, but because he defined himself as a man by being a fighter and taking care of Adrian. When he no longer fights, he has a hard time doing the one other thing that defined him.

The movie starts off by repeating the last few minutes of the previous film. There is a lot of positive emotion in that, and it is dangerous, because you remind the audience of their high expectations. The final outcome however is earned because what goes on during the middle part of the film is a reminder of why we loved these characters in the first place. It is manipulative, but guess what, that is what a good director does. He finds the right buttons to push so that you will care about the story and be satisfied that you took the trip. There is not a betrayal of the first film by the second. It is a different story,with a different outcome but with the same honest circumstance we began with in the first movie. The biggest theft of a movies well earned love with characters, came in the opening of Alien 3. That movie flushed the preceding movie down the toilet and said,”let’s start it over by kicking the audience in the teeth.” Rocky 2 doesn’t make that mistake. Of course it can’t live up to the first time, that movie came out of nowhere. Just as a second kiss or date is an extension of the relationship you started, it will not have the same electricity. Does that render it worthless? I’ll tell you what, I’ve kissed my wife a thousand times since the first electric touch of our lips. It has not always been the same, but they are all worth something and they don’t make the first time meaningless. The slogan in the trailer captures the true nature of the movie; “His whole life was a million to one shot” (the original tagline for Rocky), “Now he shows he’s one in a million.” It fits but yet it is different. Just like the movie itself.