This is a pretty straightforward biography picture, featuring Richard Pryor in a non-comedic role. He is solid and the movie is competently put together. I thought the opening section with a young bike riding Wendall Scott was a terrific st up for what is to come, and the bus ride home from the war when Wendall returns as an adult to his home town was sweet. As I was watching the credits I was interested to see the number of people that were in the movie that I recognized but did not recall being in the film.

I have never been a big racing fan, to me it was always watching someone go in circles for hours. I am in the minority because I know that NASCAR is huge and that the world is full of people that think cars are the greatest thing ever. I remember hanging out with my friend Don Hayes, he was a gearhead that spent a lot of time tweaking his car (A Chevy Vega). I actually helped him and his Uncle paint a couple of cars. We worked on the Vega and his Uncle’s 1968 Camero. We painted both of them Nassau Blue. There was a lot of wet sanding involved and we used a lot of masking tape. They wanted a really deep look, so I think they did at least five coats on each of the cars.

Anyway, this is a movie that will play well for people that love car racing. It is actually a better film for showing the progress of civil rights and the way the world changed. There are some ugly moments of racism in the film, but none was as dark as the lynching scene in “The Great Debaters”. Most of the scenes in which race reared it’s head involve name calling and a few Jim Crow laws. The “N” word is used a lot more than anyone nowadays would be comfortable with, of course it was Richard Pryor, so you know it is part of the vocabulary. The racing was actually shown from some interesting perspectives. The background with bootlegging also was accurate as a lot of the origins of this type of racing had to do with Moonshiners trying to get away from the cops.

We happened to have watched Vincent Gardenia in “Moonstruck” yesterday, and he plays a cheating Italian Husband, in “Greased Lightning” he is the redneck sheriff that turns politician. His character is actually a pretty good illustration of how attitudes changed. It was less about having an open mind then it was about facing the reality that the world is a different place then it once was and that you need to move on with your life and roll with the changes. He is a little comic in the first part of the movie, and more realistic in the last sections.

Pryor is fine,as is Pam Greer,as Wendall Scott’s wife. They are the figures that move us through the story but they are not the characters that you will remember. I liked Clevon Little, doing his jive from “Blazing Saddles” in a different time period. Beau Bridges is actually second billed, but he is only in the middle section of the film for any amount of screen time. Whereas I thought he was stiff and over the top in “Swashbuckler” a year earlier, in this movie he is natural and charming without trying to hold the screen. Exactly the kind of supporting performance you want with an actor like Richard Pryor in the lead. For some reason, Julian Bond and Richie Havens are in the movie. As President of the NCAAP, Bond might have been appropriately cast, here he is in only two scenes. He sticks out like a stiff piece of wood in both of them. The second scene he is in is a view of the Grandstand at the big final race, he has no lines, but still is unconvincing as a human being. Richie Havens was underused, but seemed pretty natural in his part. His biggest contribution was to the soundtrack, where he performs a song that narrates transitions from one period of time to the next in the film. He is basically a musical montage layered on top of the visuals. 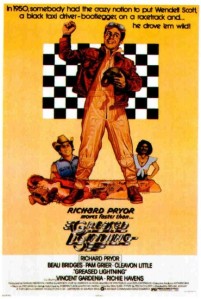 The movie was directed by Michael Schulz, one of the rare African American film directors in the 1970s. He directed “Sgt. Peppers Lonely Hearts Club Band”, the year after this. We of course are some of the few people that treasure that movie despite it’s clunkiness. It will come up later in the summer blog. So a year before John Travolta made the phrase “Greased Lightning” synonymous with his dancing and singing in “Grease”, Richard Pryor owned the idea with this charming, simple film.