So, a couple of weeks ago we had a MOTM episode on “The Hunt for Red October”. Most of the participants would put it at or near the top of the list of submarine movies. I can’t say that “Hunter Killer” is going to displace “Red October” but I can say it belongs on the list of entertaining sub movies. The plot here is a little too full of melodramatic twists to be very realistic, but it keeps you engaged and there is a nice amount of tension as you go along. If you don’t mind a few shots of models standing in for real submarines, rather than more extensive CGI, you will also like the look of the movie. It feels like a 1960s film, shot in the 1980s, with some contemporary actors standing in for folks like Charlton Heston or Rock Hudson.

The political scenario has the U.S. and Russia at odds over international policies, but there is no particular tipping point that the conflict rests on. A Russian sub, as it is leaving it’s base, is attacked and the U.S. sub following it is also attacked. We don’t know what is going on but it looks to the major powers as if one side has opened war on the other side. The Russian President conveniently arrives at the Navel base as the U.S. has inserted a SEAL reconnaissance team to investigate and report from the ground. A second American Submarine is sent into the area as back up and potentially as point in a navel battle. The captain of the American boat is Joe Glass, an officer who came from the ranks rather than the Academy, and he is played by Gerard Butler.

If this was a conventional action movie, Butler would be killing people right and left. He has made a career for himself as a tough guy hero in several recent films including “Olympus Has Fallen”. In this film, he is oddly cast because he is not required to break anyone’s neck, punch them in the face, or deliver six shots to the chest at close range. In fact, Captain Joe is reluctant to ever pull the trigger on his torpedoes and missiles. He regularly seems hesitant to take the sort of cowboy action that his casting would suggest is coming. Butler seems to be in the role because he can come off as a commanding presence who can stare down an opponent or reluctant subordinate. For this story he mostly works, although I would have liked him to go all Liam Neeson on someone at some point. 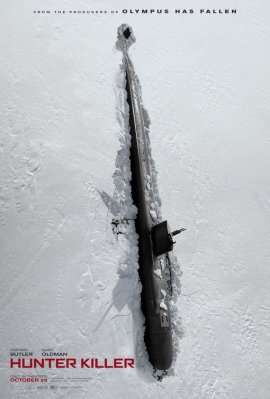 The late Michael Nyqvist plays the Russian Submarine Captain and when he and Butler are on the bridge together, this movie does come across as a poor man’s version of Red October. They have to manage to trust each other through a major crisis and hope to avert a World War. Since there is only a limited amount of sub action in the film, a big chunk of time is taken up by the covert mission on the surface. In another twist requiring Russians and Americans to trust one another, the SEAL team is asked to rescue the Russian President from an attempted coup. In another example of a Brit stealing American roles, Toby Stephens leads the seal team, much as he did in “13 Hours”.  Both he and Butler are convincing as American military officers. Less convincing are rapper turned actor Common, who looks to young to be a Rear Admiral, and current Academy Award Winner Gary Oldman, who shouts too much to be the Chairman of the Joint Chiefs.

The stuff that works includes a series of shootouts around the Russian navel base, and the submarine moments when Nyqvist and Butler have to stare down metaphorically, the Russian fleet and the narrow passages leading into the bay where the Navel base is. I was a little disappointed that bad guy Igor JiJkine, who I remembered from “Kingdom of the Crystal Skulls”, doesn’t get a memorable death. You usually want that in a film like this. We just have to assume he gets his along with all the other coup conspirators. I won’t say the movie is great but I will say I had a great time. If you measure by popcorn consumption, I finished a whole bucket by myself before the movie was two thirds done. That my friends is an entertaining flick.