If you are looking for a horror film to disturb, frighten and repel you, skip the “Halloween” sequel and go see this docudrama. With a script taken frequently from actual transcripts at trial and notes from the investigators, you will still have a hard time believing the horror that really took place in a Philadelphia Women’s Clinic for more than thirty years. What is equally horrifying is the indifference of public health officials and the media because the crimes that took place were connected to the real third rail of American Politics, abortion.

This film may be dismissed by some as a polemic about the abortion issue but it is played straight and honestly with the facts of the case. Pro-Choice advocates should be equally outraged at the crimes against largely impoverished minority women by a doctor who had little respect for them. The hubris of Kermit Gosnell is indeed the most frightening aspect of the film. This is a man who made choices in care motivated by greed, convergence and sloth. Character actor Earl Billings gets the biggest part of his career and he imbues it with a detached sense of whimsy of all things.  Gosnell is sanguine about the whole episode. He believes he has done nothing wrong and like Nero, he plays while all around him is burning down. Billings comes across in the interview segments as a friendly family doctor, but there is a true madness there for how blind he makes Gosnell seem to the disgusting environment that he occupies.

Ann McElhinney and  Phelim McAleer are documentary film makers known for taking a contrary position on a number of subjects. This film is not a documentary but it is a non-fictional docudrama which sheds light on an event which says as much about political correctness as it does about abortion. The fact that the story of Kermit Gosnell and his trial was largely ignored by the media is shown in an incredibly accurate and despairing moment in the film. The prosecutors in the case, expecting to be swarmed by journalists as the trial begins are in for a surprise. The fact that it took political gadfly’s on-line to get the story any traction is a shame. The difficulty of getting this film to theaters is also something of a problem.

Director Nick Searcy, an actor who appeared in two of last year’s best picture nominees, has directed only two features. His first was made twenty years ago and has been largely unseen, this is his second directorial effort.  With a small budget and a cast of second tier Hollywood talent, he makes the film feel much like a feature thriller in the first half. The film has a vibe like “Zodiac” because of the subject matter, but it lacks some of the cinematic touches that would make it a Hollywood entertainment. It is certainly more than one of those re-enactment shows you might see on the true crime channels. The movie is competent but without visual embellishments and script dialogue that is quotable. Searchy also plays the defense attorney at the trial and he does put on a vigorous defense of his client that the jury ultimately sees through. There is a choice to not reveal a photograph that was taken of an actual victim, and that seems to be the right choice to make the movie feel more even handed. It will be seen as a gimmick by critics of the film, but sparing the audience of the trauma revealed at the trial makes me feel relieved. The subject matter is serious and a real life photo in a movie like this might just be too exploitative. 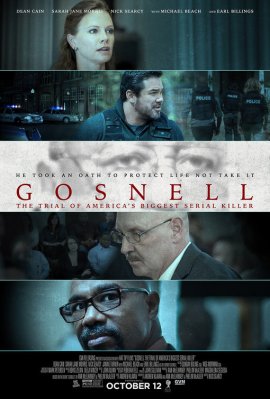 Although I described them as second tier, the actors in this film are not bad, they just are not stars. Dean Cain plays a real life Philadelphia detective who stumbles on to this case while pursuing a drug investigation. Sarah Jane Morris an accomplished television actress is the soccer mom prosecutor who believes in a woman’s right to choose but also in the law. These two play off of each other well but this is not a film that is about performance as much as it is about the culture. That society wants to look away from this subject is understandable. Opponents of abortion find horror in it’s mere existence and the advocates of choice don’t want to deal with the messy details that come along with those choices. Gosnell is one of those failings of the system that makes everyone look bad. In trying to distance the actions of Kermit Gosnell from the normal methods of operation in a woman’s clinic, the prosecutor  examines another doctor on those practices. The defense attorney is actually the one who on cross examination, reveals some pretty damning insights about the whole business.

The film may be horrifying but it is not an entertainment for the season. It is a serious look at a truly evil person who disturbingly enough lived among us.  On the surface he comes across as an eccentric physician who claims to be there to help poor women. As we crawl under that surface we see what he really is, a monster.