The man is 88 years old and still working hard to make good films. I skipped the first of his 2018 movies, the poorly reviewed “15:17 to Paris”. I was initially interested in seeing it, but the reviews were so bad that even the idea of the actual heroes playing themselves was not enough to induce me. This film does not any gimmick to it, it simply has the one essential plus that could over power any doubts; Clint is acting in the movie. In addition to directing, which has been his main focus for the last decade, he has come out of semi-retirement as on on-screen presence to deliver a performance to potentially cap off his amazing career.

It’s unlikely that he will receive Awards attention, he will be stereotyped as playing a character that he is, an old man. That character can also be seen as not to distinct from Walt in “Grand Torino”, a man who today’s generation would see as a racist because of the generation he grew up in. He is also likely to be ignored because he has crossed some lines that politically are Hollywood landmines. Regardless of whether he gets some professional accolades, I’m willing to give him some personal ones. For most of his career, he has played steel willed characters with a streak of sardonic humor. He keeps the humor for this part but adds some personal weaknesses and doubts. A lot like his character in “Million Dollar Baby”, Earl, the ninety year old drug mule in this film, struggles to connect with family and sees the most selfish impulses as the easiest ones to choose. His stubbornness is the real reason the title describes him. Earl has always done things his own way, and the fact that it might inconvenience his cartel employers is one lesson he has trouble learning.

The fun and personable aspects of Earl’s character are shown in the early scenes of his horticulturalist success, and later in the film as he parties with the drug lords. Clint manages to make a flinty old man a subject of amusement and charm. At the same time, we see that he recognizes some of his faults. There is an opening scene where he should be reminded of his own daughter’s wedding, and he brushes it off without a second thought. Towards the end of the film, we get to see that he can’t do that anymore. He sincerely wants to be there for his mostly ignored family. The facial expressions on his phone call with his granddaughter are contained looks that are appropriate for the character and the film. When Clint plays against Diane Wiest as his former wife, you can see the frustration she feels, but the aura of sadness and realization and defensiveness that Earl feels is palatable.  There is a slightly manufactured scene where Earl comes across his counterpart, a younger version of himself, someone who is driven to succeed but may be doing so at the expense of his family. As he offers advice, the voice contains the weariness that should tell the younger man that this is a man with the kind of experience to learn from. 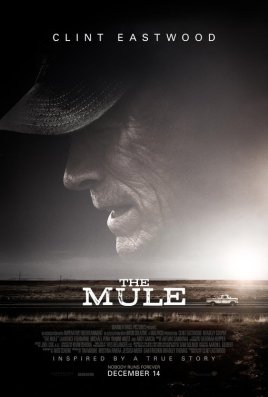 Although this is a family drama, the crime elements are barely in second place. We care about this head strong, recklessly casual nonagenarian. He jokes with the guys he is taking the drugs from, and we laugh as he struggles to figure out texting, or makes ethnically insensitive jokes with the wrong guys. You will almost certainly smile when Dean Martin is crooning and the gang is all a part of it, but when the timetable is upset or the actions of a uptight handler threaten Earl, you will feel tension and that is exactly the kind of thing that a director like Eastwood knows. He plays a old man, in over his depth, who is trying to get by on the same charm that works with his VA buddies and his friends, but we know that that is not the audience he is playing to, and disaster is on the horizon.

The cast is thick with talent, Bradley Cooper, Michael Pena, Lawrence Fishburne and Andy Garcia are all in small but valuable roles. Diane Wiest has only a few scenes but she shows again that she is one of the most talented character actors working. She is twenty years younger than Clint but you will not sense that difference in their performances. The cast that plays the drug cartel drones is chosen for their looks but they also are capable. Eastwood has picked an interesting story, put together an involving drama, and turned in a effective performance and he has done it as he himself is approaching Earl’s age. We should all be so talented and full of ambition.

Ant-Man and the Wasp

Ant-Man is a lesser Marvel Property that is slowly being elevated in status for the second generation of Post Avenger’s Infinity Wars movies.  Paul Rudd’s introduction to the MCU came in the 2015 origin story, Ant-Man. He followed that up with a quick introduction and one major scene in Captain America: Civil War.  Interestingly, he was not a part of the Infinity War movie earlier this year.  In this film we get a reason why and a strong connection in one of the mid-credit sequences as to where things could be going in next year’s “Infinity War” entry. It’s beginning to look like Thanos is not a quantum physicist.

That future speculation however has little to do with this movie. Much like its origin story, the stakes for this plot seem befittingly smaller for Ant-Man. The world is not threatened by aliens or nuclear megalomaniacs, Rudd’s Scott Lang is recruited by original Ant-Man Hank Pym and his daughter Hope, in the belief that his earlier visit to the quantum realm, has left them a path to follow to recover Hank’s long lost wife, Janet. As usual, there are plenty of complications. Black market technology thieves want the material in the fugitive Pym’s lab. A mysterious costumed character, who ends up being referred to as “Ghost”,  also wants the technology for a more personal purpose. And since Scott has been under house arrest for violating those accords meant to contain the actions of “super” beings, his fan worship of Captain America has gotten him and Pym in trouble.

So the plot is a rescue mission with a few heists and chases mixed in. Scott has to try to finish his sentence which is almost up, without having contact with Pym and Hope. Evangeline Lily returns as Hope, and has donned the tech suit created by her father which turns her into “The Wasp”.  Clearly this is a comic duo in the making, with a strong romantic strain which gives the film some Tracy/Hepburn style sparks with interpersonal confrontations mixing with the plot mechanics. Very much like the first film, this is a comedy. Much more often than in that film however, the comedy is focused on peripheral characters, like Scott’s buddy and business partner Luis. Michael Peña returns as the loquacious thief turned security expert. In a hysterical sequence that probably goes on too long, although that was the point of the sequence, he provides a whole history of his relationship with Scott in his own unique style. Also providing some humor but of a more subtle and refined style is Kirkham family favorite Walton Goggins. He has moments of frustration and fear that generate priceless laughs at the right spots.

Michael Douglas gets to put on the costume as well in this film and it turns out that Michelle Pfeiffer continues to look like a movie star. She and Tom Cruise must have made the same deal with the devil. The two more mature actors only get a little bit to do in the film, but it is enough to justify having them there, and for any fans of theirs to come out and see the picture.

I hope someday that Judy Greer and Bobby Cannavale will get to do a little more in this film series than mug for the camera, but at least their mugging is in tune with the warm humor that is usually found in Ant-Man’s family relations. This whole film plays like a palate cleanser for all the strum and d angst found in the two earlier 2018 Marvel movies. This is a comedy with action parts all over the place, rather than an action film with comedy inserted. I don’t mean that it is frivolous, but rather that it is interested in entertaining us in a very different manner than it’s older brothers and sisters. That makes sense since director Peyton Reed is a comedy film veteran, helming some solid humor filled hits back in the naughts, including “The Break-Up”, “Yes Man” and “Down with Love”. He replaced Edgar Wright on the first Ant-Man movie, and I know a lot of fans want to credit that films tone to the departed director. Fair enough, so Mr. Reed should probably get credit for the jokes that work, and a little blame for some of the bits that go on a little too long, even when they are funny.

There are plenty of effects shots that take advantage of the unique powers that the two heroes on this film possess. Stuff gets big and small at the right moment or not and the outcome works in making us laugh or adding a moments tensions to the proceedings. Because the film feels so much like a stand alone story, there may be Marvel fans out there who will give it a pass and just wait for “Captain Marvel” next year. I think that would be a mistake. There are some hints about the Infinity War at the end of the movie and in the credit sequences. Those hints should delight the fans of the main story and build even more anticipation.