Last night was a wonderful opportunity to spend time with an old friend that I’ve never met. Malcolm McDowell has been an actor I have watched for decades now in a variety of parts. I was of course first introduced to him as were most Americans by his brilliant turn in the Stanley Kubrick film “A Clockwork Orange”.  This is a film that I love but that my wife loathed, but her dislike for the movie had nothing to do with McDowell. In fact, one of the two films playing last night was a favorite of hers and it may be one of the most romantic films we saw together as a couple.

One of the ways you can get a little spoiled by living in Southern California is by having these kinds of opportunities on a regular basis. In fact it was only six months ago that Malcolm and I previously spent time together. He was a host at a musical salute to Kubrick by the Los Angeles Philharmonic. Most of the stories he told that day focused on his work with Kubrick and their subsequent relationship. Last night however, at the break between films, the subjects of his stories were primarily about the Director Lindsay Anderson, who plucked McDowell from theatrical work in Great Britain and plugged him into the film world that would become his main home.

There were dozens of stories he told to interviewer Alex Simon, but every time Simon tried to move on to Kubrick or Schrader, McDowell found a way to bring the discussion back to his long time friend and mentor. There was a terrific story about Lindsay Anderson visiting John Ford near the end of the western directors life. McDowell is quite the raconteur and was never at a loss for something interesting to share. He offered us the invitation to watch a film of the presentation he did about Lindsay Anderson at a Film festival a few years ago. I found the link he suggested and I am sharing it with you now. I look forward to watching the whole thing. 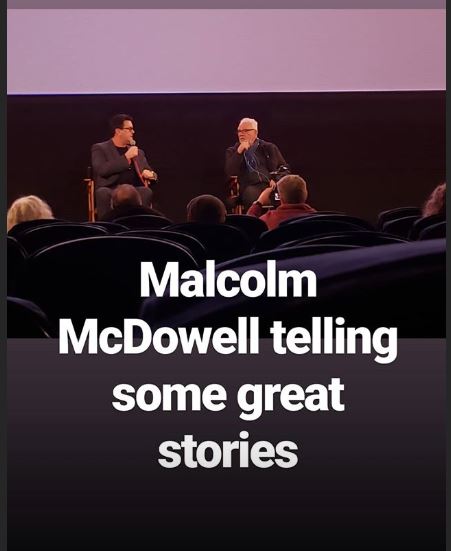 As for the features, well it has been a long time since I saw “Cat People”, the overly literal remake of the classic horror film from 1942. This film came out forty years later in a great cinema year but definitely a different time in Hollywood.

I had forgotten the long lead in sequence with backstory about the origins of the Cat People of the story. It actually looks like a long outtake from the new version of “Dune” that we are supposed to get next year. The desert sky is orange, the tree in the center of the sequence is dead and there is dust everywhere.

The real story picks up when Nastassja Kinski shows up in New Orleans to reconnect with her brother played by Malcolm McDowell. They were separated as children after their parents died and it is just as she is turning twenty or so that they are reunited. Mr. McDowell had nothing but great things to say about her beauty in the film and how happy he was to be working with her. In his introduction to the first movie, he did point out that he had to learn to act backwards because there is one sequence early on that is shot in reverse to give the actions of the character an more ethereal feel. He did seem to regret that he never needed this skill for any subsequent film.

In 1982, this film felt weird but not out of place with the times. There was a lot of experimentation with psycho sexual themes and mystery stories and even science fiction horror moments. I can’t quite put my finger on why 80s horror movies feel as ominous as they do, but also fresh and distinctive in spite of mining some of the same tropes over and over. Director Schrader does allow the slow build of some of the tension in the film, but cuts down so much on the narrative that at times it was hard to figure out the motivations of any of the characters. For instance, actress Annette O’Toole plays a character who seems at times to be romantically linked with leading man John Heard, but she also seems nonplussed at the growing romance between Heard and Kinski’s characters. In the end it doesn’t matter much because she ends up naked in the pool while being stalked, so the focus is all on her in that scene when in the original it was the exact opposite. The shadows and light were the focus of the pool scene in the 1942 film.

Probably because Schrader has a deep history with religious themes, McDowell is presnted as some sort of religious zealot, although that ends up having little to do with the story, except to create a sense of regret and guilt in his character. That would have been a worthy way to make this film more distinctive, rather than the more explicit sex and violence path that the movie ends up following. Another one of those weird elements that seems to fit in with the times is the presence of another character who may or may not know about the carnivorous sexual habits of her employer. Ruby Dee is enigmatic as the housekeeper that is also keeping secrets. Her facial expressions and have spoken warnings seem to fit with a lot of short hand characters from movies of that time, Scatman Crothers in “the Shining” is a similar character.

I did remember how the film ends and it is both laughable and tragically appropriate. Still the most memorable element of the movie is the score by Giorgio Moroder  and the theme song by David Bowie. The Bowie tune will be most familiar to modern audiences through it’s use in “Inglorious Basterds”.  Here is a link so you can enjoy the song as you continue reading.

After the first film is when Alex Simon and Malcolm McDowell engaged in their discussion and some Q and A with the audience. I’ve already described some of it to you and I’m sure the video on “Never Apologize” above will have some of the same things. I do want to briefly talk about his response to an audience member’s question about “Caligula”. McDowell was brutal in his assessment of Gore Vidal as a screen writer. Vidal had his name taken off the film and claimed that Bob Guccione, the producer and uncredited director of the film ruined it. McDowell says that Vidal’s screenplay was shit and nothing could have saved this turkey. He then told a great story about pranking Vidal with Truman Capote, a writing nemesis, over some laundry. It was quite amusing, as was McDowell’s comment that Vidal could take his name off the film, but Malcolm couldn’t.

The second film on the schedule is far better and more memorable for a lot of reasons. To begin with, the script is a tightly plotted mystery thriller with an irresistible concept. H.G. Wells, the author actually has a time machine and Jack the Ripper uses it to escape to the future where Wells attempts to pursue him. It is a great mash up of science fiction, horror-thriller, procedural and romance in one. The director here was Nicholas Myer, making his directing debut. Myer had previously written the screenplay for the movie made from his novel, the “Seven Percent Solution” another pairing of historical characters, Sigmund Freud and Sherlock Holmes.

“Time After Time” is actually the final film on my original blog project from 2010. There is not much I would add to my original comments about the film, I would urge you to go back and read them. I think the less you know of the plot mechanics the more satisfying the film is. There was one element that I will repeat here and it ties into my point about this film being a romantic masterpiece. When asked about the most memorable part of part in this film, without hesitation McDowell said meeting, falling in love with and marrying Mary Steenburgen. Their marriage lasted more than a decade and they have two children together and a very friendly relationship despite the break up. I claim that you can literally see them falling in love with one another in this movie.

Of course that is the story of the film but the idea of chemistry between actors has never been so obvious in my eyes. good actors can fake it even when they despise on another, but this is a case of reality intruding into the film itself.

I think I was a little critical of the special effects when I first wrote about this movie a decade ago. The photographic effects work pretty well for the kind of story we are being told here and they seemed to hold up better on the big screen last night then they did on home video when I last saw this film for a review.

I will just briefly mention that before the program started, I had gone up to the bathroom and I was a little put out by the fact that a group of people were conducting a conversation in the entryway of the theater, blocking my return to my seat. Imagine my surprise when it turned out that the two people involved were the interviewer and the special guest for the evening. I did eavesdrop a little on their conversation. Alex Simon was reminding McDowell that he had interviewed him almost fifteen years ago for a different project and they engaged in some more small talk. I went back to my seat, comfortable in the knowledge that the featured guest was here and in good form, and thankful that the cranky old man in me had not snapped at them for blocking the path.