The Art of Racing in the Rain

If you look at this film from a cinematic perspective, you are unlikely to be impressed. It is well shot but there is nothing innovative here. The story is melodramatic, male weepy material, and the dog narrates. Those would be things that turn off serious film buffs but they are exactly the kinds of things that would sell this movie to a specific audience and make it work. Well, I’m that audience and guess what, on an emotional level it works. Movies where the dog is a featured character have been around forever and they usually are designed for one purpose, to wring as many tears out of a person as possible. Check that off the list, this movie brings the tears for dog lovers everywhere. From the opening scene, we know how the movie is going to end, and that includes not just the metaphorical puddle but a real one as well.

I’ve never seen “This is Us” the television series that features the star of this movie Milo Ventimiglia. He is apparently quite strong in that role since he has been Emmy nominated three years in a row, but this is my introduction to his work and he is fine. I don’t know that there is much he can do with the role because he is basically a human punching bag with a side kick. The character of Denny Swift is an aspiring race car driver, who has opportunities snatched away from him and side roads in his life that turn into bad trips. All of that is tolerable because he has a dog with him to remind himself of the possibilities in life that he talks about regularly.

Amanda Seyfried has reached the stage in life where she has gone from playing the ingenue to playing the young mother. Her romance with Denny is swift and their life together is beautiful, until it is time for more stuff to hit the fan, then she becomes another plot point in the story. Human characters elicit empathy in movies when we are engaged in their lives, so the events that overtake her don’t have the same impact as the third major character in the film. That third character is the one we will have all the emotional connection to. That third character is the dog.

Enzo is the name of the dog. He is played by at least three different golden retrievers, as a pup, a young healthy dog and the older wiser pooch we meet at the beginning of the story and at the end. In the first five minutes, the conclusion is foreshadowed and we get an hour and a half to gird ourselves for the denouement. It’s still not enough time. In addition to being the world’s friendliest looking dog, Enzo has the gravelly and still slightly whiney voice of Kevin Costner. The actor never appears on screen but he is the star of this movie, telling us the story from the perspective of the dog. I hope he got paid well because he earns all the emotional beats for the film’s narratives. Speaking of getting paid, I am looking in the mailbox for our residual check. Look at these pictures. 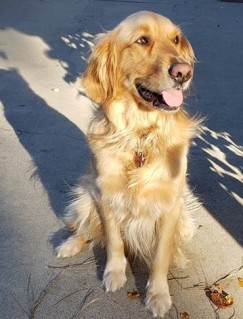 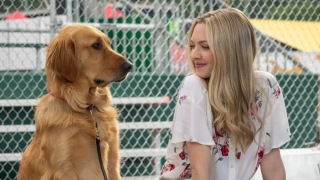 Our dog may very well have snuck off and filmed this movie while we were not looking. The number of times there was an expression on Enzo’s face that I have seen on our own dog’s face is too numerous to catalog. If you control for lighting, these dogs are the same and even have the same inner voice (dog owners know what I mean).

There is nothing subtle about where this is heading. The manipulative plot devise that involves a custody dispute aside, the dog’s arc is the backbone of the story. Kathy Baker and Martin Donovan have the thankless roles of antagonists in the later part of the story and Gary Cole provides his usual welcome presence in i small part as a mentor of sorts to Denny.  The best acting however is done by the dog and everyone knows that this is his film and let him walk away with the movie on all four paws. Bring your tissues because you will weep if you are a person who loves a dog.

I am a sucker for movies based on historical events. I don’t mean those that are just inspired by true events, I mean stories about history. All narratives are subjective so I recognize that the emphasis of some stories is going to change from one story teller to another, but the key events , they stay the same. A battle is won, a President is Elected or killed, or a human achievement is accomplished. You don’t have to make those things up. It is one of the reasons that I look forward to “Dunkirk” next summer. It is a key incident in the outcome of WWII, and even though the story may be dramatized, the events are real. “Hidden Figures” is exactly that type of movie.

For kids of my generation, the American Astronauts were the biggest heroes we could imagine. As a child, I never much paid attention to the technicians I’d see on television,  at their stations, monitoring all that could go wrong. I did however come to recognize them from mission to mission. This movie tells the story behind the scenes of the behind the scenes of the early space missions. The fact that it is an empowering women’s film and an important achievement in civil rights is what helps make it so much more interesting and worth telling. A movie about people sitting at desks doing math, sounds almost like the equivalent of watching paint dry. It may be important but it is only going to be of interest to someone who knows the numbers. The people who put those numbers together here are what the story is all about.

Taraji Henson, Octavia Spencer, and Janelle Monae are three bright math whizzes, working at doing computations for NASA, and facing two strikes. In 1961, women were largely excluded from the military and science community at NASA and these women happen to be black. They are not however, shrinking violets, they are empowered by their talents and more importantly their mission. Although there is a civil rights story here, it is largely powered by the exigencies of trying to build the math and engineering required for Americans to gain a foothold in the space race. There are a few of the traditional symbols of the movement, MLK speaking on television, violence in the south, and protests about segregation. The two obvious illustrations in this story are not however overtly about a struggle to achieve equal rights but to build an effective team. Henson’s character Katherine, has difficulty doing her job because of the bathroom situation. She is excluded in an overtly racist manner by a coffee pot. When Kevin Costner’s program director confronts these injustices, it is for building meritocracy, not to correct a social injustice. All of the women characters certainly want social justice, but first they want to be allowed to do their jobs and do them to the best of their ability. That is the most ennobling part of the story that I saw. 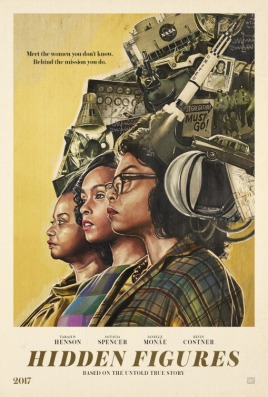 This is a film that could easily be a prism viewpoint of the space race as told in “The Right Stuff“. Many of the events and characters repeat in the time periods covered. Just as the movie focusing on the Mercury astronauts rightly pointed out, this film amplifies why the recently deceased John Glenn was a national hero. As the three women represent the hidden struggles of the space program and America’s self defeating institutional racism, Glenn represents the best in all of us. We want the talented and professionals to do their jobs so everyone else ca. These women showed that there were barriers preventing that from happening, and those barriers shackled our potential. We may not be completely out of the woods on these problems, but thank goodness we don’t have the same attitudes with the same prevalence today.

The film manages to be highly entertaining and accessible to all groups. There may be a few small children who would not enjoy it much but everyone else should be happy to see this. There is humor, tension, and heroic drama throughout the film. The few characters that might be seen as villains of the piece are mostly just trapped in the mindset of the time and need some opportunities to grow, just as the oppressed women did. Americans of all races should be proud of the accomplishments of the space program in the sixties. It should be a unifying experience to take the steps to the stars, and this movie reminds us that it would not have been possible if we did not all move forward together.