The advantage of being an older adult is that I don’t feel compelled to try to know everything by searching the internet constantly. I had only a vague notion that this movie existed, and I had no idea that it was based on a YA novel series. As a result, I was mostly uncertain of where much of this was going or even what the hell was happening at times. The concept of “The Noise” gets introduced fairly early, and that is the key twist in the story. I don’t think it is a spoiler to say that the men in this world are basically displaying their thoughts out loud and visually to those around them. This makes secret keeping and lying difficult. It also sets up the main flaw in the premise which you will probably identify before I get to it below.

The two young leads might have been a tell as to the YA origins of the film if I had been paying attention. Daisy Ridley is a rising actress with the latest Star Wars films under her belt. Tom Holland is of course the current “Spider-Man” and his winsome manner and somewhat nasally voice are perfect for the kind of character he is playing in this film. This is a combination western/sci-fi/fish out of water story. Daisy’s character is Viola, a space traveler who in a scouting mission to the new world her group is traveling to, crashes into an environment that is not only unfamiliar to her but presents a communication scenario she never could have imagined. Tom is Todd, a native of the new world who’s family immigrated but died long ago. He is also out of water because in his world there are no living women.

Once the story starts rolling out, the plot line has only a few surprises. The two leads have to go on the run, they are pursued by an implacable foe, and there are complications along the way. Despite being set in the future, the setting feels like a western. Maybe because there are horses involve (and there is even an explanation of why there are horses on this new world). So Butch and Sundance have to evade the posse, and reach an objective. I suspect that the film has compacted many elements of the novels. As I listened to some of the teen girls in the audience chat with each other after the film, it seems the story has material from all three source novels and not just the first. It ends in an open enough way that sequels could be possible, but if another film is never made, the conclusion is perfectly acceptable, it does not leave us dangling.

The director Doug Liman, is a competent action director who has made a couple of films with Tom Cruise, a Bourne movie and Mr. and Mrs. Smith. He keeps enough chase scenes and fights with the influence of “The Noise” to make the movie feel like it is active, but some of the complications from the thing that distinguishes this story from all other dystopian YA, “The Noise”, gets lost in tying to keep things moving. “What Women Want” was a movie that took the same premise essentially and made it intp a comedy concept. This is a more serious story but it is still trying to avoid being too dark. All of us have had abhorrent thoughts in our heads that we are glad that no one else can know, What would the consequence be if those thoughts could not be hidden. This movie does not come close to that. “The Noise” becomes a trivial inconvenience that allows some mental magic, but that’s about all. The one character who makes it potentially dark, David Olelowo’s Aaron-the Preacher, mostly lurks in the background and arrives as a boogeyman to commit the most horrendous act of the story, but his demon’s are never really explored. That is probably the main difference between an adult sci-fi story and this YA concoction.

Visually, the movie works well. The effects masters have come up with an interesting way to share “the Noise” so that we don’t just hear a continuous  internal monologue. There is a combination of traditional frontier living and space age colonization, but there is not a very clear explanation of why the technology process has largely been abandoned. An alien race is introduced, and I suspect it plays a much bigger part in the books than it does in this movie. The landscape that the story takes place in is shot beautifully and there are just enough f/x elements around the edges to suggest a different planet, but that is barely part of the story.

At the heart of the plot is a secret that drives the main villain, the Mayor of settlement where Viola’s craft lands, played by Mads Mikkelsen. As I said in opening paragraph, there is a flaw in the premise of this plot. If everyone knows what really happened before Todd grew up, how is it that they have kept that knowledge from him? The Mayor is the only character who seems to have the strength to hide some of his thoughts, but the settlement is populated with a variety of other men, two of whom have raised Todd. How did they keep the secret from him? The Preacher is openly antagonistic, why would he have kept this a secret? It does not make any sense and as a result, we are required to dip into out bag full of suspension of disbelief and pour a cupful on this story for it to make any sense.  As the plot plays out there are a number of intriguing events that feel like they would make a better story than the one that we are following at the moment.

Overall I enjoyed the movie in spite of the flaw that I saw. The actors are engaging and well cast. There is enough action to keep us hooked on what is going on, and the movie looks great. I will end with one warning. If you are more sensitive to animal deaths on film than human deaths, this is a movie you might find to be challenging. There are at least two moments where that scenario plays out and one of them is haunting in a way that some of us might have a hard time with it.

Now that we have talked about the foreigners, let’s discuss a home brewed concoction of history, baloney and Tom Cruise. “American Made” is the supposed true story of Barry Seal, who as a convicted drug smuggler negotiated a deal to assist the D.E.A. in in their investigations. The makers of this film, decide to splice the C.I.A., Iran-Contra and every president from Jimmy Carter up to George W. Bush into this story. I just hope that film goers recognize that Hollywood is a bad place to learn about history, even when it is a good place to make an engaging film.

All of the political material is nearly superfluous, since there is no real agenda in this movie other than to entertain us for a couple of hours.  The time line, characters and general insanity that take place are clearly the invention of creative minds rather than advocates with an agenda. In my opinion, this is the movie that “the Wolf of Wall Street” could have been if that film making crew had stuck to telling an interesting story instead of glorifying in excess and then pontificating at us. Director Doug Liman has the good fortune to have his personable con-man played by the personable Tom Cruise, who shakes off the unfortunate “Mummy” curse with a much more polished performance here. 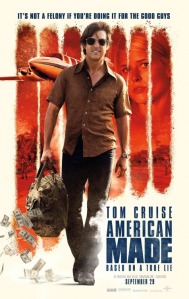 The visions of excess here do not involve repeated episodes of drug use, sex and humiliation of other human beings. Rather, the situation attempts to lampoon the success of the drug trade by noting how problematic the issue of laundering the money would be. While there is one scene where Cruise as Seal gets covered in the imported product, he does not spend two thirds of the movie cranked up like Leonardo DiCapro. Instead, he is waist deep in cash and can’t find a way to hide the money as fast as he is making it. The story plays out like a comedy version of a double episode of “Miami Vice”. Seal and his wife argue over when he should rake up all the buried cash the dog has dug up. The town that he relocates to is flush with newly created financial institutions that seem to be serving a population of under 3000 with the kinds of banking services you’d find not too far off of Wall Street.

Domhnall Gleeson plays the imaginary C.I.A. recruiter who is supposed to have set Barry down the path to self destruction. He has a great American Accent, but not a very believable role. Sarah Wright plays the spouse of our gun running, drug smuggling, money laundering hero. I’ve not seen her before that I recall but she fits the part as written just fine. Caleb Landry Jones plays the misbegotten brother-in-law JB. Up to the point when his character exits the picture, the film plays like “Hogan’s Heroes” set in Central America. The movie takes a nasty turn after that and you will find that the real life BarrySeal had real life consequences to his actions.

I was a little nonplussed at the inclusion of a sequence that seems to have been taken from last year’s “Jack Reacher” film, also starring Cruise. I suppose the allure of Tom being so untouchable is just too much catnip to resist for film makers. I will however advise that they drop this soon to be Cruise Trope before the next “Mission Impossible”. I don’t think you want your Crown Jewel film franchise to be seen as cribbing from lesser works. Even if they are entertaining.