Won’t You Be My Neighbor?

I am not a big consumer of documentary films, but I do try to see those things that interest me. When I first saw the trailer for this movie, I was definitely interested. Most Americans will be familiar with Mr. Rogers even if they were not the audience for the show. Millions of kids have been exposed to his work, and he has been parodied by everyone from Johnny Carson to Eddie Murphy. The trailer evokes a simple and heart-warming approach to the work of a man who for all appearances was genuinely caring about children.

The film has received a lot of hype in the last few weeks. A local entertainment reporter was rapturous in singing it’s praise. I do think it is a fine film about a fascinating subject but be cautious of being oversold. My guess is that people offering reviews for this movie are so starved for something worthy and genuine to write about, that they may heap effusive praise on a very good film, and try to pass it off as a great film.

The work that goes into a documentary includes hundreds of hours of research and digging through archives and editing together various film elements. The Academy Award winning director of this film, Morgan Neville, has done a thorough job of finding interesting material to show us, collaborators and friends of Fred Rogers to speak to, and  just a couple of minor controversies to make the story a bit more compelling. The style of the film however is straight forward, there is nothing particularly innovative about the approach here, most of the audience interest in the film is going to stem from the subject matter and personality of the show we are looking at. The winsome charm of Fred Rogers is the draw for this movie.

We will learn a little bit about his early life, he was a seminary student when he became interested in television for children. He was an ordained minister for the Presbyterian Church, and sure to irritate many of those who would like to politicize everything, he was a lifelong Republican. Everything we see in the film suggests that he was a nice man, who believed love was an important part of a child’s life and tried to make all children feel loved. Some social critics have tried to tie his open support of children to the Millennial phenomena of entitlement. The link there is so capricious that it hardly needs to be responded to. Mr. Rogers view of a child’s need for love stem from biblical concepts not self esteem books. While he was a critic of many children’s programs, his criticism was generic to the tone, themes, violence and “bombardment” of kids as opposed to focusing on particular programs.

The need for a movie about this subject at this time seems to be fertilized by all the rancor and hostility in the world. Again, social advocates may try to make hay out of some of the themes and events covered by the documentary, but the true value is that we see a decent man, doing good in the world. He worked hard and was as unassuming in his real life as he seemed to be on television. Everyone should be able to slow down a little and connect with a man who tried to teach children to love one another and set an example for adults as well. That’s as much endorsement as a movie like this needs. “A little kindness makes a world of difference.”

All Things Must Pass

Sunday night, we seized the opportunity to have one last go at this documentary about the rise and fall of Tower records, with a Q and A session with Director Colin Hanks and Executive Producer Glen Zipper. It was a last minute add after two nights of previous screenings that we were not able to make it to. I can happily say I am really glad to have made it to the film, it was a fascinating look into the history of one of the great retail stores that catered to music lovers around the world. The movie examines not only the impact that Tower had on the culture of music but it also provides a unique example of history, a detailed look at an  American business in the second half of the Twentieth Century.

Russ Solomon is the founder of Tower Records and an out-sized personality that took to the music business after selling used records from the jukebox in his father’s drugstore. The film follows his story as he builds a business, expands it almost accidentally and creates a unique business culture that empowered the managers of the stores he owned to imbue them with their own personality. Hanks started the process of putting this film together more than seven years ago, and he was able to get many hours of interviews with his subjects over that time. As with ever film, the story evolves from the material that gets developed and the editor hones it into a narrative that makes some sense. This turned into a look at the “family” that was created by the Tower records approach. Ultimately that family has to go through a pretty harsh crisis and when it gets to that point, we have been surprisingly brought into the fold to share it with them.

In the Q & A, Hanks explained that everyone had stories about their experiences with Tower. One of the questions from the audience concerned a specific location. As the director put it, “Those stories are better told over a beer in a bar than they are on screen.” The one really great exception occurs when the story is told by one of the biggest rock stars of the last forty years. Elton John is interviewed and through a quirk of fate, there is even film of him going over his lists of music as he shops at Tower on Sunset Blvd. Personally, I always liked going to Tower wherever I happened to be. In 1977, we were at a Debate Tournament in Sacramento and we went shopping at Tower one night while we were there. I picked up an 8-track of the Bee Gees Mr. Natural at the home store for the chain. Most of my later Tower experiences were with the stores in Buena Park, Brea, and Hollywood.

There is a good mix of personalities from the company to tell the story. They all seemed to love the company although they did not always seem to like each other. The fall of the company may have been casually blamed on Napster, I seem to remember Justin Timberlake making a snide comment as the character of Sean Parker in “The Social Network”, crowing over the corpse of Tower, but in this movie, the collapse was shown to be a lot more complicated. On-line music has not killed the sold off Tower Stores in Japan, so there might still have been a place for the company, if they had not been so heavily leveraged and the economy had not tanked.  Technology has changed the marketplace, but there is still a large segment of the population who love physical media (like me) and wish we had a paradise to indulge in browsing, handling, sharing and dreaming in real time rather than the virtual world.

My friend Michael, met us at the theater and he is a big music guy. In addition to being a former projectionist, he is an aficionado of analog vinyl  music. He seemed to really appreciate the movie as well. It is a great opportunity to see some old clips of Los Angeles and San Fransisco as well as to bend another persons ear about the good old days of record stores. Licorice Pizza, Music Plus, The Wherehouse are all gone, but none of them are recalled with the fondness that people have for Tower records. If you have any interest in the story, this is a film to check out. 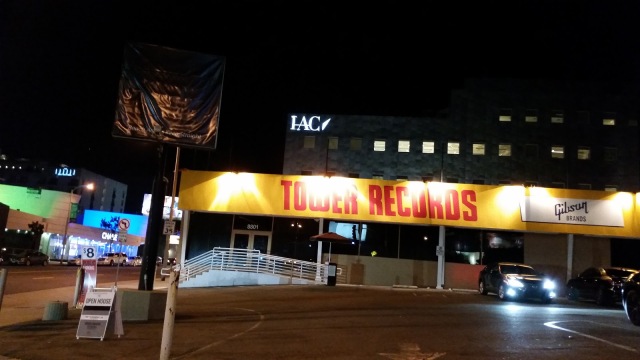 We took an extra few minutes to cruise down from the Archlight and visit the old Sunset site. Hanks had been on the Mark in the Morning show the Wednesday before the weekend, promoting the film, and he had mentioned that they had restored some of the look of the old building for an opening party that they had. It probably won’t stay that way forever, but if your nostalgia itch gets to be strong enough, take a trip down the blvd. and let your heart jump in hope that the past eight years has all been a nightmare and we can now stop in and find out what’s new in the music world.