I understand the commerce behind a film like this. Big action, a big star, and over the top visual sequences make money. Look, I put down my twelve bucks so I guess I should not complain too much, except what does it say about me and the rest of humanity when we watch disaster porn? Are we confronting our fears and our own mortality or are we revealing in the destruction and enjoying watching millions of people die? I just can’t answer. I feel a little dirty but it is also such a stupid movie that I feel silly for feeling guilty, talk about mixed emotions.

Southern California is the only home I have ever known, and I know that we are all going to be very unhappy when the “Big One” does show up. I rode out the 1971 quake in Sylmar, the 87 Whittier Narrows Quake that killed my hometown theater, and the 94 Northridge quake which made the area sit up and beg. Every once in a while we get a good sized movement of the earth that reminds us that stuff is happening below our feet. This movie wants to bitch slap you into alertness and then make you care about five people while the whole west coast is going to hell in a handbasket. If anyone is better prepared as a result of seeing this, that would be a good thing. The problem is that this movie suggests that we are all pretty much screwed unless we have a helicopter, a plane and a boat at our disposal. Also, pack Dwayne Johnson in your EQ kit because mere mortals are not going to survive without this kind of hero.

The former “Rock” has been a movie star for fifteen years now. He is in one of the biggest franchises in Hollywood, and he gets better as an actor each time out while keeping the charisma that made him a star wrestler before he moved over to the silver screen. He loads this unbelievably derivative story on his broad shoulders and powers though it as if it were Shakespeare. He does not play it camp and he does a credible job playing the hero that everyone will need in a disaster. If Liam Neeson and others are the Old Guy fantasy of competence, Johnson is right there with them, assuming the old guys look like Arnold Schwarzenegger reborn.

Take three parts “Earthquake”, one part “The Towering Inferno”, one part “The Poseidon Adventure”, throw in a dash of “2012” and “The Day After” and you have this movie. Match it with state of the art visual effects to depress the hell out of anyone who remembers 9/11 and you will see what I mean. This movie is cheesy as hell but also sadly familiar. I spent hours watching tsunami videos after the Japanese disaster a few years ago, and I felt like a gawker at the scene of a car accident, but still not able to look away. The dramatic action scenes in this movie still manage to involve you because the main characters are likable and we have followed them through the whole story, but look around and there are a hundred other stories that end in tragedy every time our leads make it thorough ( which they would never do it this was real.) 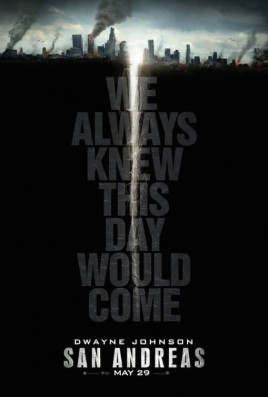 Paul Giamatti is credible as a Cal Tech scientist, and he adds a little gravitas to the proceedings but the whole scenario is so over the top that in the long run it does not matter. If you can swallow your self loathing and just load up on popcorn, you will be moderately entertained. If you are at all conflicted about the idea, then maybe you should wait for the next comic book movie, where it is easier to laugh off the ludicrous amount of destruction as just being a movie.